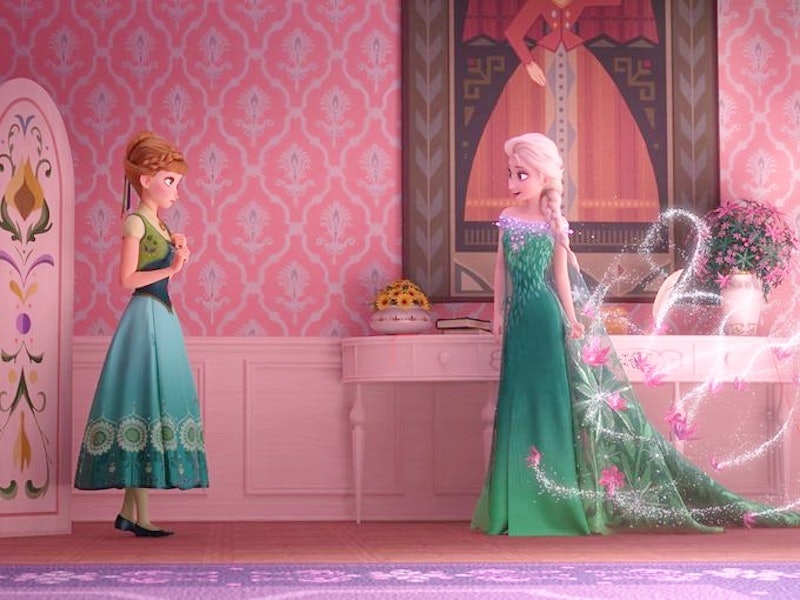 Since Disney first announced that an animated short set in the Frozen world would debut before the live action take on Cinderella in theaters, I've been super excited — mostly because I'm one of those annoying people who still isn't sick of "Let It Go." And although there seems to be no evidence that the song is making a comeback, all of our favorite characters are. Elsa, Anna, Kristoff, Olaf — everyone is there to celebrate Anna's birthday, although things obviously go wrong along the way. And after months of anticipation, the first trailer for Frozen Fever has officially arrived, and it looks magical.

And just because it's a short instead of a full movie doesn't mean Disney skimped out on anything. All of the original voice cast has returned, and the animation is as gorgeous and as true to the original as you'd hope. In fact, just from the 30 second trailer alone, I can tell that Frozen fans (like me!) are going to love this. The only bad part? We have to wait until March 13, which seems like forever from now.

In the meantime, though, there are plenty of things Disney has given us to look forward to, and these are some of the moments from the trailer that will make you ridiculously excited to see the whole thing.

And I love it. There are ice pillars and stuff, but with elements of summer, like sunflowers. Doesn't it make you all warm and gooey inside to think that nobody has to be locked up in that sad castle anymore?

They both have new dresses

Seriously cute dresses, especially Elsa's. In keeping with the theme that Elsa and Anna's worlds can now be joined, her famous ice-themed gown is now decorated with flowers. Will this be in stores? I need one of these. For, you know, reasons. Should a Frozen sequel happen — and Disney would be crazy not to go in that direction next — I hope these dresses carry over.

Now, Elsa's the one waking Anna up

You know, instead of the other way around. And yes, Anna still represents all of us when we first wake up in the morning. Bedhead everywhere.

And they get to ride bikes around the castle together.

Instead of Anna singing songs about how she has to do everything alone, Elsa and Anna are now doing all the things Anna once had to do by herself because her sister was locked up for fear of turning her into a block of ice forever. I have no idea what the bread is about, though. Snacks for later? They need to carb up if they're going to make this bike riding a regular thing.

And there are plenty of other callbacks to the original movie.

Like this giant coo-coo clock that Anna and Hans danced on during "Love is an Open Door?" Except this time, Hans is nowhere to be seen, thank goodness.

I hope his adorable family is in the short, too. Hoo hoo!