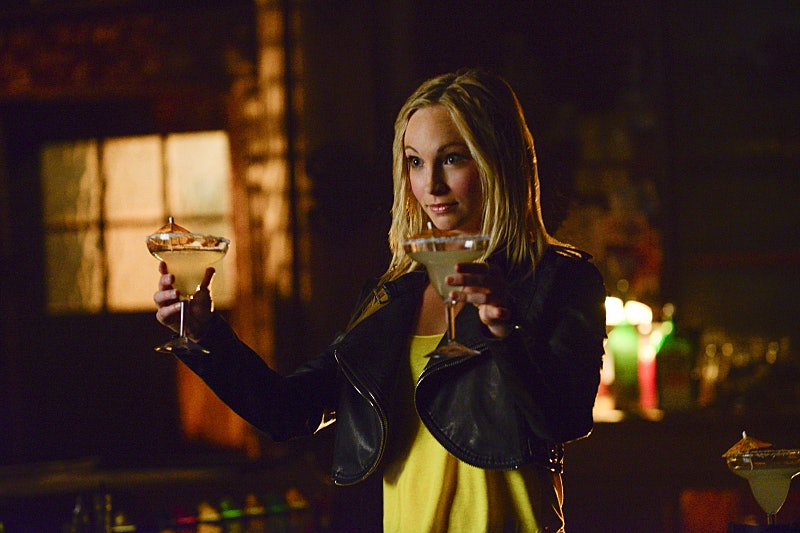 The Vampire Diaries has a knack for always leaving its fans wanting more. Which is why it should come as no surprise that after a superbly well done episode like "Let Her Go" — which culminated in a humanity-less Caroline and the realization that Lily Salvatore is still alive — that the series would choose to go on a brief hiatus. (Seriously, Julie Plec, why you gotta stake a girl through the heart like that?) But fear not, my fellow vamp lovers, because we'll only have to wait until March 12 for The Vampire Diaries to return.

Is that longer than most of us would like? Absolutely. But two weeks is nothing in comparison to the three months we face during the summer. (I mean, I love the weather, but where the hell are my shows?!) Of course, that's not to say that we can't still obsess over everything that's happened throughout these past few episodes, which is sure produce some very compelling storylines in the not-too-distant future. So, while we wait for our beloved Mystic Falls gang to return, it seemed only perfectly right compile a list of thoughts and questions we'll have while we wait for TVD to return. And, believe me, there are a lot of them.

Caroline Without Her Humanity… What Does That Even Look Like?

I mean, she's gotta be the most controlled out-of-control vampire in history, right?

What Does This Mean For Steroline?

Her lack of emotions may take romance out of the equation, but would 'shippers be satisfied with a steamy hook-up instead? Or even better…

Just imagine the interaction between her and Klaus. She'd no longer feel guilty for liking him and something tells me he would love to introduce her to a different side of vampirism. If Caroline really is heading over to the dark side, I really can't think of a better tour guide than this guy.

And If She Ends Up Staying There For Good, So Be It!

Don't get me wrong, Caroline's presence on TVD would be sorely missed, but if this is what it takes to get a Klaroline reunion, then we're gaining far more than we're losing.

Will There Be More Sheriff Forbes Flashbacks?

And if so, I only hope my poor, weeping heart can take it.

And How About That Lily Salvatore Reveal?

Granted, we should've known Damon and Stefan's mom would come into the picture eventually. I mean, "dead" never really means dead on this show 95 percent of the time, but STILL — great reveal.

Does This Mean She's A Witch?

Is she evil? Is she a member of the Gemini Coven? Why was she sent to a prison world? How many questions can I ask about this until my head explodes?

Things seem to be on pretty solid ground between Damon and Elena right now, but will all of that change now that Bonnie's back in the picture? Personally, I'm kinda loving their relationship as is, so keeping them as BFFs would be fine by me.

Bonnie & Kai, On The Other Hand…

I'd totally be down for these two getting together. I mean, two powerful witches that are not to be trifled with? INTO IT.

Will Jo & Alaric Have Twins?

And if so, does this mean they'll eventually have to merge together because that's super depressing. Also, let's discuss baby names. If it's a boy: Damon, and if it's a girl: Jenna. (Still too soon? It might be too soon.)