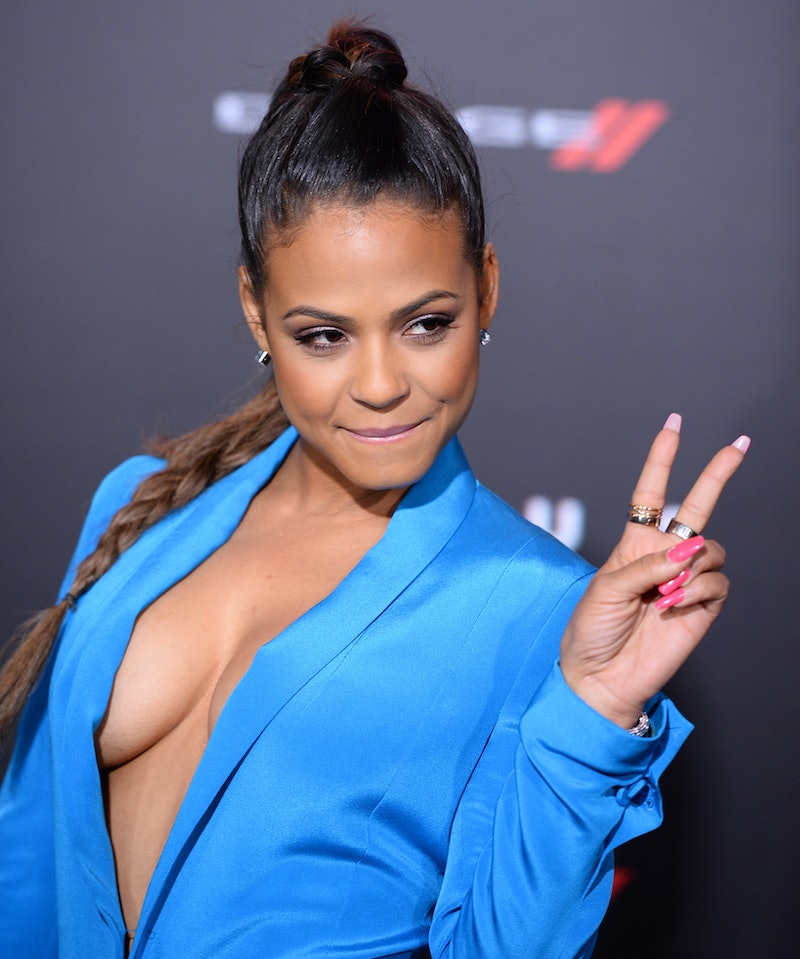 With a multitude of dynamic trends circulating about the Hollywood crowd, one specifically seems to stand out — the two-piece pantsuit. As a revamped version of an oldie but goodie, this modernized version leaves the collared shirt at home, opting instead for bare skin under the blazer. Recently spotted on A-list stars like Jennifer Aniston and Anna Kendrick, the shirtless pantsuit is quickly climbing up the popularity ladder. But the latest celeb to rock the look was, unfortunately, not quite successful at it. Christina Milian suffered a wardrobe malfunction in her shirtless pants suit at the L.A. premiere of Focus, and it was rather... awkward.

The singer wore a bright blue suit sans shirt that definitely commanded attention, as her quite ample lady lumps were fully on display. From the front the look was super sexy, but from the side it showed a little too much cleave, and a nip-slip was pretty obvious. It looks like she really tried to avoid this mishap by using body tape, which was also clearly visible from some angles — oops! Sadly, this unfortunate situation could have easily been prevented, had Milian taken more precautionary measures (which I'm sure she wishes she had done).

The shirtless pantsuit is super chic and cool, but a nip-slip is totally not. So let's take a look at three ways to prevent this awkward wardrobe malfunction from happening.

Christina's blazer is really low-cut. Had she pinned the plunging neckline a bit higher, she would have had more coverage and less chances of an "accident."

If you're going to do the whole no shirt thing, you better make sure your blazer is tailored to perfection. Christina's blazer looks a bit ill-fitting. A tighter, more body-hugging fit would keep the girls safely tucked away.

There are other ways of achieving this look without going completely bare. If you really don't want to wear a shirt, a lacy bralette is a good option. Choosing one in a neutral color with a "push-up" feature would still give you this sexy vibe.