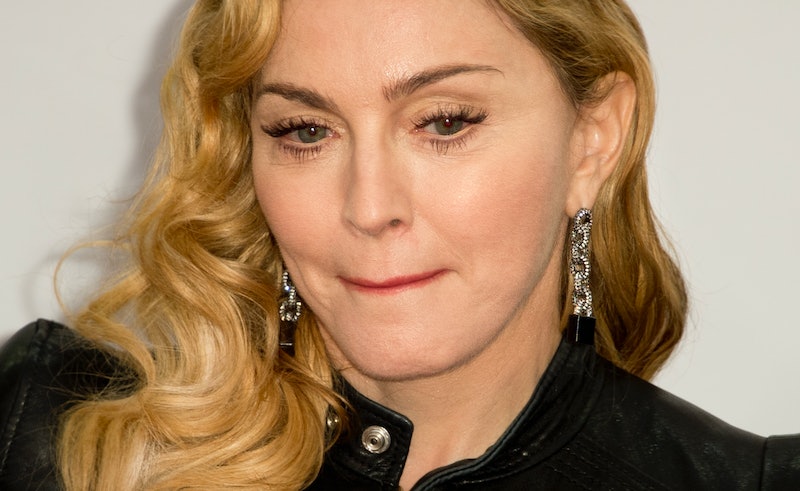 The Queen of Pop is not worried about losing the crown to another pop star. Madonna made this very much clear when she finally directly addressed her supposed feud with Lady Gaga in a new interview with Rolling Stone. Madonna said her only issue with Gaga was the ripoff of one of her old songs, and that she doesn't care about the feud, which she called "boring." She revealed:

The only time I ever criticized Lady Gaga was when I felt like she blatantly ripped off one of my songs. It's got nothing to do with "she's taking my crown" or "she's in some space of mine." She has her thing. I do think she's a very talented singer and songwriter. It was just that one issue.

In case you need a refresher, Madonna made the five-dollar-word "reductive" a hot Internet search when she used the term back in 2012 in an interview with ABC News to describe Gaga's "Born This Way," a song that was criticized for sounding remarkably similar to Madonna's old hit, "Express Yourself." (By the way, "reductive" is defined by Oxford Dictionaries as "tending to present a subject or problem in a simplified form, especially one viewed as crude." Ouch.) Madonna's sly comments about "Born This Way," along with her leaked song "Two Steps Behind Me," from 2014, which referenced an unnamed "copycat," sparked rumors of a serious feud between the two pop stars. But now, Madonna has some interesting thoughts on the larger implications of the beef rumors. In that same interview with Rolling Stone, she said: "We live in a world where people like to pit women against each other. And this is why I love the idea of embracing other females who are doing what I'm doing."

While Madonna might not have seen eye-to-eye with Gaga for loving her sound a little too much in "Born This Way," it is good to hear that she has not continued to dwell on the one issue. It's also a positive thing that she is able to see the larger picture here about women often being pitted against one another in show business. After all, who can forget the long-fueled media rivalry between Britney Spears and Christina Aguilera? Or the more recent speculation that Iggy Azalea and Nicki Minaj are "feuding"? It's worth applauding Madonna for not indulging in that any longer.

Also, Madonna is not wrong about her embrace of other females in the pop world who enjoy being provocative. After all, she has collaborated with Nicki Minaj for her Super Bowl performance back in 2012 and has, of course, collaborated with Britney Spears for many songs and performances. Heck, Madonna even showed Lady G herself some love on her Instagram a couple months ago.

Madonna's new album Rebel Heart is set to be released on March 6. Let's hope we hear some more positive sounds of female empowerment from her then.