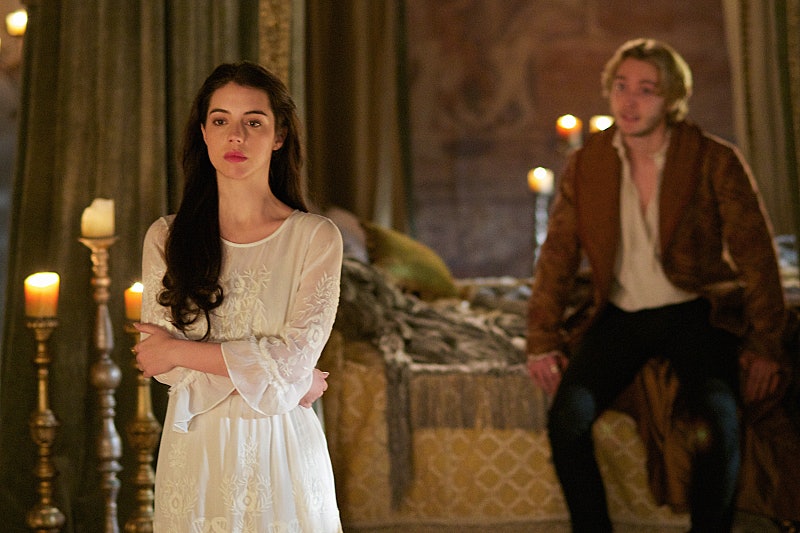 Is it just me or is life at court starting to seem like not a lot of fun? When you're not busy being blackmailed for killing your father, you're hallucinating about having sex with your dead husband's ghost. Suffice to say, it's been a pretty crazy year for our beloved Reign and, with the fate of Francis and Mary's marriage now in jeopardy, there's no telling what kind of tragic events will eventually unfold. (If it wasn't for the gorgeous outfits and Narcisse's penchant toward baths, I'd be downright depressed at this point.) But unfortunately, we're going to have to wait a little while longer than expected to discover what exactly those "tragic events" could possibly be. Because, Reign won't be returning until March 12, immediately following a brand new episode of its predecessor, The Vampire Diaries. [UPDATE: The CW has announced that Reign will premiere on Oct. 9.]

That's leaves us with two full weeks left until we're finally reunited with our royal subjects. I know, it's certainly not the greatest news in the world, but that leaves us with plenty of time to ponder what the rest of the season has in store. And, believe me, given all that's transpired throughout the last few episodes, I'd say the series still has a slew of surprises up its sleeve. So, as we await for Reign's impending return, here are some of the more important questions that are bound to plague (pun intended) our minds in the meantime.

Will Mary Really Leave For Scotland?

I understand that she wants to take a powerful stance as Scotland's ruler, especially now that her mother is very ill, but are the writers really going to place Mary so far apart from the rest of the main cast? Does she intend to stay there permanently? What will this mean for her marriage to Francis? Speaking of which…

Will Francis & Mary Ever Reconcile?

It's been so hard to see these two, who still care so much for each other, feel so shut off from one another both physically and emotionally. I understand why Mary associates him with the night she was raped — it was his decisions that led to that horrible moment after all, but, I really do hope they can work it out. Francis has been so sweet and supportive. Those puppy dog eyes are killing me, you guys.

Can Bash Salvage His Marriage To Kenna?

As much as I still love Bash, he really hasn't been the best husband lately. I understand that he has a job to do, but making time with your wife a priority can go a long way down the road. Keep this up and she'll have no choice, but to fall into Antoine's waiting arms.

Are We Done With the Supernatural Stuff?

Strike that. What I meant to ask is can we please be done with the supernatural stuff? I know most of it ended up being chocked up to the side effects of a poisoned Bible, but still. Enough with everyone seeing dead people. This isn't The Sixth Sense.

Which Queen Will Conde Choose?

Now that he has the option of being Mary's lover or courting the Queen of England, what will be Conde's next move? We already know his heart belongs to Mary, but will his underlying thirst for the crown get the best of him, thereby leaving Mary in the dust? It's really hard to say at this point, though I personally wouldn't be all that sad to say goodbye.

Is Greer Basically a Pimp Now?

I really hope this story is going somewhere interesting because right now, watching her just pimp out prostitutes to her royal friends is kinda falling flat.

Will Narcisse and Lola Ever Hook Up?

I love that this relationship has been such a slow burn, but now that I've seen the two of them kiss, I definitely want more. At the very least, let them take a bath together. So come on, Reign. Give the people (i.e. me) what they want.