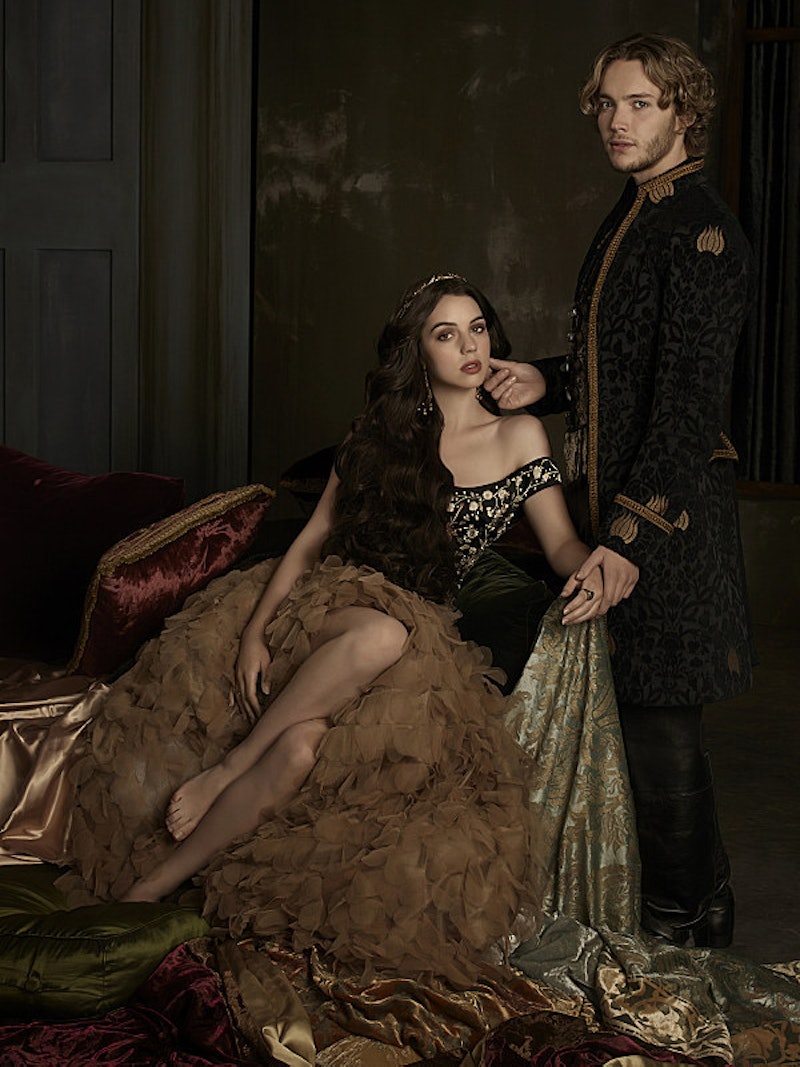 The threat of a plague… shifting alliances… romantic entanglements — it must be about time to return to the French Court. Ever since Reign Season 1 first made its royal debut on our television screens last fall, it became painstakingly clear that life was never going to be easy for Mary Queen of Scots. I mean, already in the span of one season Mary has thwarted death multiple times, gone toe-to-toe with her scheming mother-in-law, and learned that her husband is the father of another woman’s child. So with the exception of having potentially the best wardrobe ever, this girl seriously cannot catch a break. And from the looks of things, there’s going to be a lot more where that came from when next season rolls around. Thanks to the recent release of Reign ’s Season 2 trailer, we see death and destruction have plagued the lands (quite literally) as Mary struggles to save not just the country, but her marriage as well.

Yes, unfortunately, things are not looking great for the brand new acting King and Queen of France. Now that Lola has given birth to her baby, Mary and Francis’ relationship will definitely suffer, especially since she herself is struggling to conceive. Throughout the trailer, we see snippets of a beaming Francis holding his newborn child as Lola looks on. Buzzfeed recently chatted with Reign co-creator Laurie McCarthy, who confirmed that this little bundle of joy will, indeed, put a great deal of stress and tension on Mary and Francis’ marriage.

“It’s a thorn in their marriage… And Francis will have a bond with Lola that isn’t necessarily sexual — although it clearly was at one point. Francis is eager to have a family and it puts a lot of pressure on Mary, who historically had incredible difficulty conceiving. And the harder his job gets, the more pleasure he’ll take in simpler things, and [his son] is a simpler relationship.”

I can practically hear the Bash supporters celebrating from here.

However, I’m far from being ready to write these two off. Sure, they may have their fair share of problems right now, but there are still a few ways these two could end up finding their happily ever after. Such as…

Unless Mary wants to have a mistress situation on her hands like Catherine, she may consider bribing Lola to take her baby and leave the country, giving her friend every assurance that she would be well taken care of. Francis would undoubtedly be furious if he found out, so naturally it would all have to be done in secret. It’s just a question of if Mary has it in her to separate a child from its father. Normally, I wouldn’t think so, but now that she’s queen I suppose anything is possible.

Is it a bit morbid? Yes, but that doesn't mean it can't happen. As this show has proven in the past, it has absolutely no problem with killing off important characters. (RIP, King Henry) So it’s entirely possible that Lola could end up meeting her demise, whether it be intentionally or accidentally. (Has anyone checked Catherine's poison supply lately?) Either way, this would allow Mary and Francis to potentially raise the baby as their own and hopefully bring them closer together.

History buffs will know that this option wouldn’t exactly be historically accurate, however, this show isn’t exactly intended to be a documentary, so the writers could decide to take certain liberties. Adelaide Kane, who plays Mary, recently spoke with Entertainment Weekly about this possibility and admitted that she thinks “there will probably be a pregnancy” in Mary's future. She even discusses the idea of a phantom pregnancy, which I guess would fit well into the whole “haunted” theme of Season 2.

Preferably though, I’d love for the pregnancy to be real. Not only would this firmly help solidify the strength of their marriage, but it would also give fans the chance to see Mary walking around in what would surely be stunning maternity gowns. Plus, who are we to say no to more Mary and Francis sex scenes? The way I see it, it's a win-win situation all around!

More like this
The 'P-Valley' Season 2 Trailer Teases A Major Shakeup At The Pynk
By Johnny Brayson
The Time Traveler’s Wife Book Has A Heartbreaking Ending
By K.W. Colyard
Selena Gomez’s ‘SNL’ Hosting Debut Had Twitter Gushing Over ‘Barney’ & Wigs
By Stephanie Topacio Long
‘SNL’ Referenced Jesse Williams’ Broadway Leak In A Chaotic Theater Sketch
By Grace Wehniainen
Get Even More From Bustle — Sign Up For The Newsletter