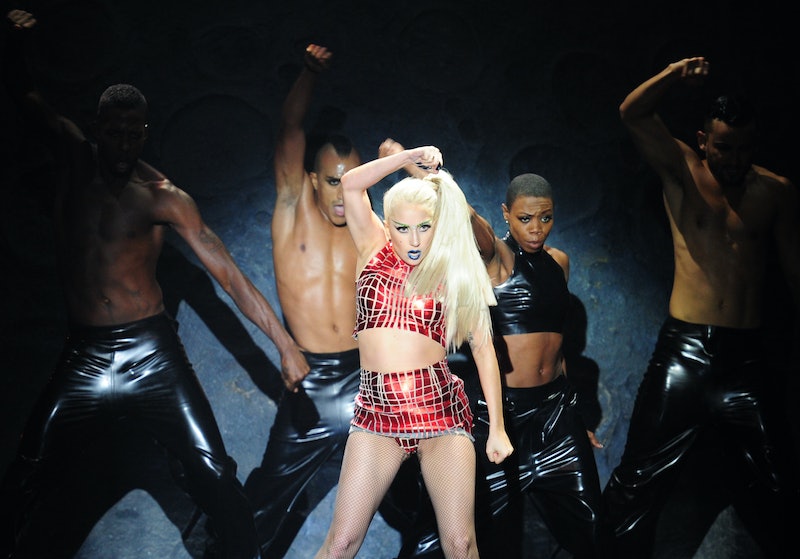 As you may have heard, the newest addition to the cast of American Horror Story is Lady Gaga herself. I guess in some ways it's weird, given that Gaga is a professional singer, not an actress, but in a bunch of other ways, it makes so much sense, that I can't believe I didn't think of it on my own. Like, props to you for dreaming it up, Ryan Murphy, but it was basically a foregone conclusion, so don't take too much credit.

We don't have too much information about the upcoming fifth season, unfortunately, except for some clues littered through Season 4, and the cryptic hashtag #AHSHotel, which Gaga used to announce the news on Twitter. But even though we've been kept largely in the dark, we can take some guesses as to what it won't be about. Since Murphy changes up the theme every season, I can say pretty confidently that the show Gaga joins won't center around a freak show, a coven, an asylum, or a... murder house. Whatever that is. But no matter where the show is set, I'm pretty convinced that Gaga is the perfect addition, and here are just nine reasons why.

She Already Has The Costumes

Just think of how much budget the wardrobe department will save!

You remember that whole thing where she had a "vomit artist" throw up on her for SXSW, right? Once you've seen that horror, AHS seems positively PG.

She Went To School For Theater

Before she dropped out to pursue music as her onstage alter ego Lady Gaga, Stefani Germanotta was a drama student at New York University's Tisch School of the Arts.

She's Used To Changing Every Season

Gaga never sticks with one theme for long, so she and AHS already have that in common.

The show tends to incorporate musical numbers from time to time, which is ideal for Gaga. I mean clearly she's a platinum-selling musical artist, but she also recently proved during her Sound Of Music performance at the Oscars that she can kill it even without all the showmanship.

She's No Stranger To A Miniseries, Whatever That Is

Considering how theatrical some of Gaga's old music videos were (do you remember "Bad Romance" and "Telephone"??) , this format should be right up her alley!

You Know She Has Her Eye On An EGOT

If there's one thing I know about Gaga without needing to be told, it's that she'd love to get those four main awards: Emmy, Grammy, Oscar, Tony. She already has six Grammys, so it's time to get to work on a project that could get her nominated in another field.

It Can Distract Her From Wedding Planning

Gaga just got engaged to Taylor Kinney, and having something to focus on that isn't wedding-related will probably do her a world of good.

She Could Gender Bend

Remember when Gaga appeared at the 2011 MTV Video Music Awards as her male alter ego, Joe Calderone? I could see him making a reappearance on AHS, just to really keep us all guessing.