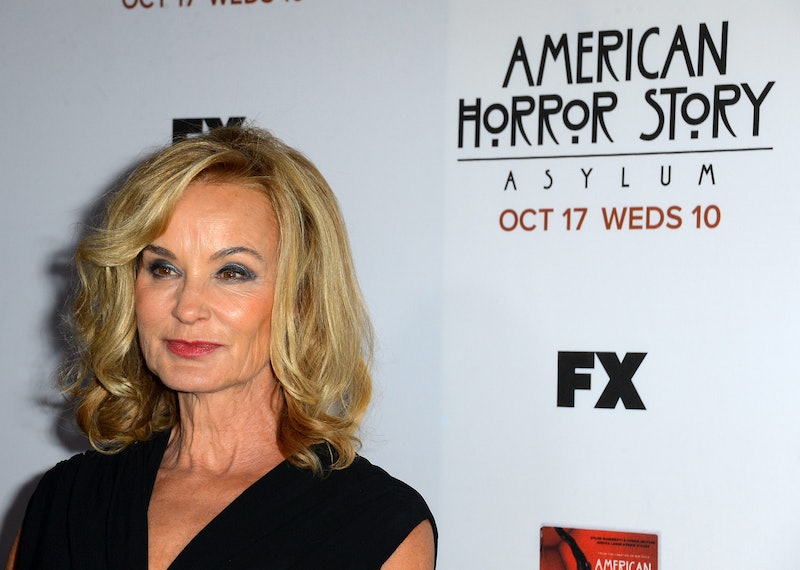 It seems like American Horror Story: Freak Show just ended — because it kinda did. The last episode of Freak Show aired back in January, but no worries, because on Wednesday, we learned two crazy pieces of news via Twitter — Lady Gaga is joining Season 5 of American Horror Story, and it's going to be set in a horror hotel. "Make your reservation now," she tweeted, with a spooky little video to match. Even though the new season won’t premiere until October, there’s plenty to speculate about now that we know season 7 scary setting.

Hotel is likely to be the scariest Horror Story yet — some of the more hair-raising horror movies of our time have been set in sinister hotels, where you can check in... but you might never check out. (And we’re not just talking about the Hotel California, but, hey, that counts too. So much for easy listening.) So what can we expect about the hotel and its guests? Even though the details about AHS: Hotel are sparse, you can probably bet that Ryan Murphy's FX show will borrow from these classics. After all, you gotta pay homage to the tropes and fixtures of ominous inns. As for what role Lady Gaga will play, that’s still up in the air, but she’s definitely got the darkness in her.

Psycho set the bar high for the scary bathroom scene, its combo of the knife shadow and iconic high-pitched music becoming a stand-in for all murderous intentions. The Bates Motel is one of the freakiest places to rest your head for the night. Let's not forget The Shining, though, with its horrific bathroom scene; Jack kisses the ghost of a beautiful woman who rots into a ghost in his arms. Even though The Shining is one of my favorite movies, I still can't watch this scene without my fingers in front of my eyes.

Now, for convenience's sake, the bathroom scene is often coupled with the suicide of a former guest. It's murky in Kubrick's film adaptation, but if you've read Stephen King's The Shining, you'll know that the woman in the tub is Mrs. Massey, who killed herself with booze and pills after her young lover left her. Killing two birds with one stone.

It's pretty much mandatory that the hotel has to have at least ONE murder, suicide, or disaster in its past, whose ghosts are still wandering the halls and haunting the hotel until they can pass on to the next life. Think: The Innkeepers, about a closing hotel that has a legend of a bride hanging herself after her fiancee left her. Oof!

The concierge. The bartender. The bellhop. The lounge singer. The maids. There's always at least one nefarious person on staff, either trying to convince guests to stay in the hotel forever, or else they're just a regular old ghost. Or they're Norman Bates, who's in a creepy-ass class of his own.

There is, of course, the infamous room 237 from The Overlook Hotel, but in another lesser known Stephen King adaptation, it's room 1408. The film, 1408, stars John Cusack as a skeptical travel reporter who comes to the Dolphin Hotel in New York to disprove the myth of the evil room, where apparently, 56 people have died. I don't care if you're a non-believer, you still should not mess with that shit. But, because it's a horror movie, he obviously messes with that shit.

Always gotta be someone that thinks they're immune to ghosts and evil. No one's immune to ghosts and evils, you fools. Jack Torrance is warned in The Shining that the hotel is built on an Indian burial ground (also a good fixture in any haunted hotel flick), but he don't care. John Cusack in 1408 is sooo smug about being a non-believer, and he definitely gets his just desserts. Even in the Disney movie Tower of Terror (which scared the crap out of me as a kid), there's a reporter that visits the hotel to investigate a mystery of a bunch of missing guests. Of course, they're always alone, because that's a grand old idea that never backfires.

It goes without saying that the hotel has to have some evil spirits that inhabit it, or a ton of deaths and murders on its grounds that ruined what was once the glory days of the hotel. It's usually a good bet to have a fancy party full of dressed-up ghosts in a hotel ballroom. That always makes for spooky stuff.