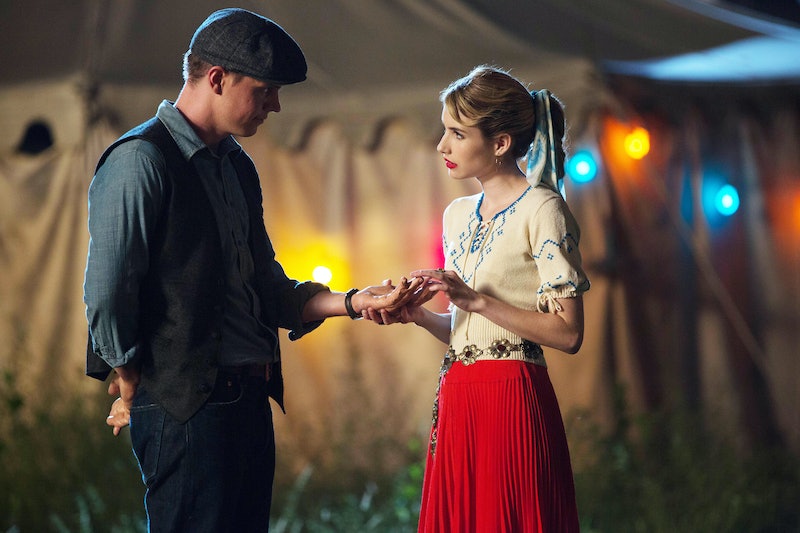 Like every season of American Horror Story (and, let's face it, pretty much every Ryan Murphy project), Freak Show and its fair share of both fans and detractors. Season 4 of FX's anthology series has been lauded by some for its fascinating ensemble of characters — the murderous and spoiled Dandy Mott chief among them. Others have criticized it for both its lack of a central conflict and its lack of scares. But whatever your opinion on the events that have transpired at Fräulein Elsa's Cabinet of Curiosities, it's worth sticking around, since the AHS: Freak Show finale (appropriately titled "Curtain Call") is only one week away, surely you're not going to miss Jessica Lange's last hour on AHS, right? (If she's truly not returning, that is — a fact I'm not at all convinced of.)

But what on earth is going to go down before the curtain falls? With Murphy's penchant for out-of-left-field twists, trying to predict AHS is usually an exercise in futility... but I can use the exercise, so what the heck. We do have one clue: no matter what happens, Elsa makes it out of Jupiter alive and ends up a Hollywood star, according to the magazine cover Pepper saw at Briarcliff. But how does she get there? What happens to her freaks? Will Dandy or Chester kill everyone? I'm going to pull a Maggie Esmeralda and try to catch a glimpse of the future... even if I don't actually have magic powers.

The biggest unanswered question going into "Curtain Call" will undoubtedly be: How does Elsa become a TV star if the man who's supposedly helping her get there is actually just a con man murdering her troupe of freaks for cash? My theory is that Stanley will still help Elsa achieve her Hollywood dream... just not by his own volition. Remember that the con man's defining trait is that he possesses a whopping 13-inch penis. Although he can hide it in his trousers, that giant member makes him as much of a freak as anyone in Elsa's show. When Elsa finds out that Stanley has been behind the deaths of her beloved monsters (which she undoubtedly will before the season is over), simply shooting him in the head like she did Dell last week won't be nearly enough. Instead, I'll bet she'll geld the deceiving murderer and sell his over-large parts to the Museum of Morbidity for cash... and use that cash to move to L.A. and start her career as an actress.

The other thing we know for a fact will happen before the season ends is the triumphant return of demon freak Edward Mordrake — his most recent victim, Twisty the Clown, in tow. If the man with two faces played by Wes Bentley is coming back, that must mean that's Halloween in Jupiter again and he's coming to claim the next member of his ghostly sideshow. When it was announced that he would return, most of us assumed he would be coming back for Elsa Mars, whom he almost took last time... before deciding that Twisty was more pathetic. But now we know that Elsa survives at least another ten years after the main events of Freak Show... so who will Mordrake take with him? Well, who else but the most despicable character of the season — and Twisty's successor, to boot — Dandy Mott himself?

...But Not Before Dandy Has The Freaks Kill Chester

Although the last episode, "Magical Thinking," ended with Chester's doll Marjorie talking the new owner of the Cabinet of Curiosities into sawing Bette and Dot in half, the promos suggest that his real victim will be someone else entirely. Perhaps Dandy, before he's dragged to hell, discovers Chester's intentions and — still being in love with the conjoined twins, of course — convinces the magician to change his target. To whom, you ask? Why not the girl who's already suspicious of his stabby predilections, whom he himself almost sawed in half earlier this season? That's right — I suspect Maggie Esmeralda will be the unfortunate woman in Chester's bloody magic trick. (A blink-and-you'll-miss-it shot in the latest promo shows the fake fortune teller inside Chester's box, screaming.)

After Chester kills Maggie, it will be easy for Dandy to convince her lover, Jimmy, and the rest of the freaks to rise up against their new owner. The episode description for "Curtain Call" tells us, "The Freaks rebel against new management." So, by coercing Chester into killing Maggie, Dandy kills three birds with one stone: he eliminates a threat (Maggie), he dispatches a rival (Chester), and he saves his love (Bette & Dot).

Without Elsa, The Freak Show Closes For Good

Of course, with Elsa in Hollywood and Chester dead, there will be no one left to run the freak show. Dandy could always buy it with his massive fortune, but if my theory is right, he won't be around much longer, either. So the Cabinet of Curiosities will sadly be forced to close up shop. At that point, the only freaks who will be left alive would be the two-headed Tattlers, handless Jimmy, three-breasted Desiree, Amazon Eve, Paul the Illustrated Seal, Legless Suzi, and Toulouse. Perhaps the diminished troupe, lacking another option, will simply remain in Jupiter, setting up a commune of sorts for out-of-work freaks like themselves and other outcasts from society.

Everything Ties Directly Into Asylum

Of course, if Ryan Murphy wants to double-down on his everything-in-AHS-is-connected assertion, then Freak Show will end with a couple of direct tie-ins to the events of Asylum, the season with which its most closely linked thanks to Pepper's backstory and the appearance of Lily Rabe as her Season 2 character, Sister Mary Eunice. Perhaps, before he's taken by Mordrake, Dandy will have one more session with his unseen therapist... who turns out to be young psychiatrist (and budding sociopath himself) Oliver Threadson, aka Bloody Face, who's been observing and learning from Dandy's murderous ways this whole time.

And then perhaps the season will end with a flash-forward to give us a glimpse of Elsa's life in 1962... when the Hollywood songstress accidentally runs over a girl with her car after a night of drinking, flees to a convent to repent, changes her name to Jude Martin to avoid the limelight... and is eventually given a post at Briarcliff Asylum. Boom. Everything is connected.