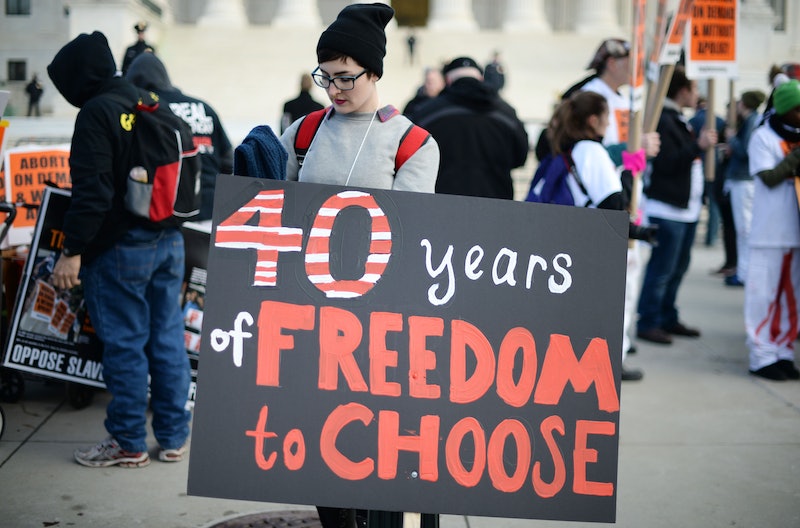 There's another abortion ban coming to a state near you. On Wednesday, the West Virginia state legislature approved a 20-week abortion ban, even though the state's governor vetoed a similar bill just one year ago. The abortion restriction easily passed the state Senate in a 29-5 vote, and has already been approved by the House of Delegates.

The bill, HB 2568, is one of the most extreme 20-week proposals out there: Although it includes an exemption if a woman's health or life is in jeopardy, it doesn't allow abortions past the 20th week in cases of rape or incest. West Virginia representatives previously attempted to add amendments to the bill for victims of rape and incest, but none of the exemptions were approved.

For several West Virginia legislators, the lack of a rape exemption wasn't a problem. When debating the bill earlier in the month, newly elected Del. Saira Blair — the 18-year-old political prodigy — sparked some controversy when she said abortion "isn't about a woman's body," according to the Charleston Daily Mail.

"My heart truly goes out to [rape victims]," Blair reportedly said on the House floor. "However, it's unfair to punish this innocent child who has done nothing wrong."

Other legislators have also made disparaging remarks about women, rape and abortion when discussing the proposed 20-week ban. West Virginia Del. Brian Kurcaba reportedly said that it's "beautiful" when a child is born from rape:

Obviously rape is one of the most egregious acts that anybody could every do to somebody ... what is beautiful is the child that could come as a production of this (rape).

Kurcaba's office later released a statement apologizing for his remarks, stating the West Virginia delegate just wanted to uphold the "sanctity of life."

Gov. Earl Ray Tomblin has promised to veto the bill when it comes across his desk. However, the state legislature can easily override his veto. If the law does go in effect, then West Virginia would become the 11th state with a 20-week abortion ban.

Melissa Reed, vice president of public policy at Planned Parenthood South Atlantic, criticized the extreme bill in in a statement on Wednesday:

While women should not have to justify their personal medical decisions, the reality is that abortion later in pregnancy is very rare and often happens in complex circumstances where a wanted pregnancy has gone tragically wrong — these are the kind of situations where a woman and her doctor need every medical option available. This bill is part of a broader effort to chip away at abortion access, and it is deeply unpopular with the majority of West Virginians.