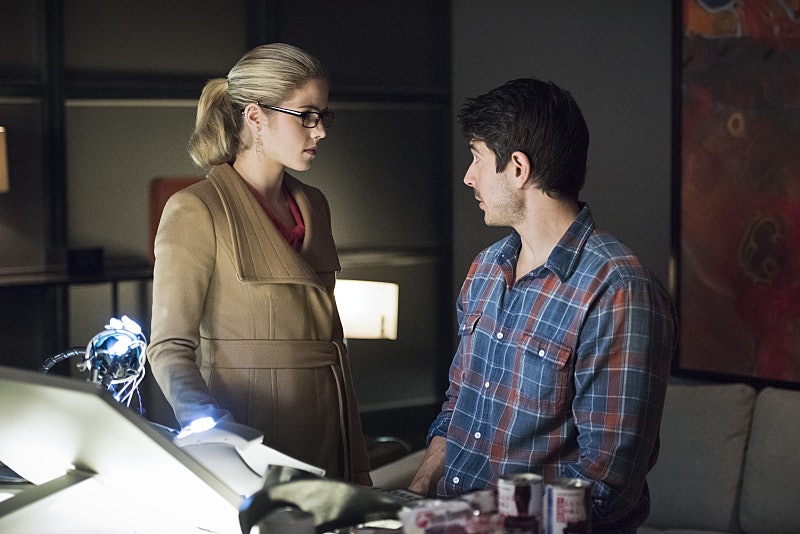 It's always hard when a character has insane chemistry with more than one person on a show. Who do you root for? Which 'ship do you want to see set sail? Well, during Wednesday night's Arrow episode "Nanda Parbat," I found myself asking those exact same questions. Because even though I've been a tried and true Olicity supporter for going on three seasons now, I find myself growing more and more fond of Team Raylicity. And now that Felicity and Ray have slept together, I'm convinced more than ever that they may just be the best (and cutest) couple this show has ever seen.

I know, I know, I can practically hear all of your bow quivers tightening, ready to fire an arrow into my traitorous heart, but hear me out for a minute and let me explain. First of all, I'm not saying that having sex automatically makes them the better pairing. (Though, I mean, it definitely didn't hurt things.) It's more about the events that lead up to that moment instead. I love Oliver, but he is so stubborn that he never really listens to the voice of reason. And when I say "voice of reason," I, of course, mean Felicity. She tries to talk some sense into him, but it never sticks. But with Ray, he completely trusts her judgement and actually listens to what she has to say.

In fact, she's so used to nobody heeding her advice that she went and locked him out of his own internet server to prevent him from working anymore. Ray explained later to her that she didn't need to do that. He knows how valuable her opinion is, so to see our girl get that kind of well-deserved support was very refreshing and proved that this could be a 'ship built to last. And that compliment is what led to her kissing him… which led to him kissing her back… which led to ya know.

Suffice to say, I was really into their relationship this week. Not to sound too corny or anything, but the A.T.O.M. suit wasn't the only thing to take flight by episode's end. (Get it?) Keep up the good work you two because I'm into it.