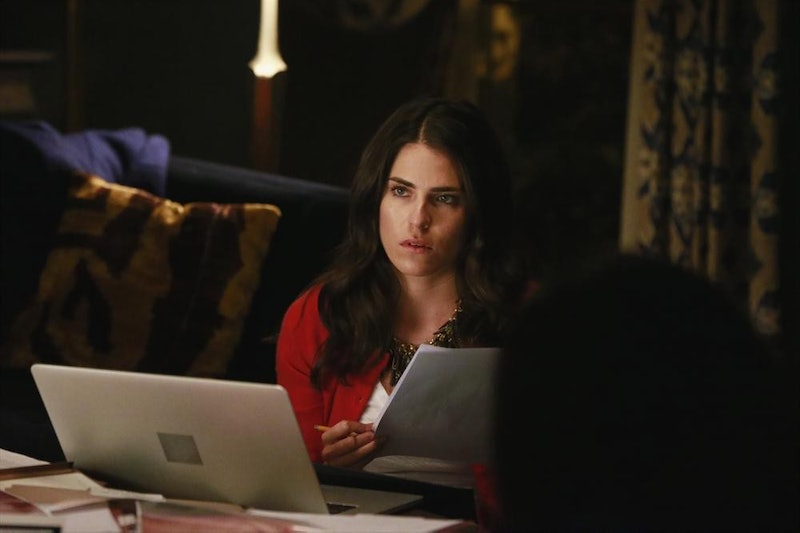 Thursday night is the long-awaited How to Get Away With Murder Season 1 finale and I have to admit I have no idea what to expect anymore. The series has this way of always surprising me and I can't imagine the finale will be any different. One thing I can't believe I've come to enjoy is the secret relationship between Laurel Castillo (played by Karla Souza) and law-student-skirt chasing associate Frank Delfino (played by Charlie Weber). But will it continue — and will Laurel make it to Season 2? Because you never know — it is a show about murder, after all.

Laurel found herself caught in a love triangle in Season 1, between Frank and Kan, the good-guy lawyer who works at the legal aid office. To make it a square, Frank also had a girlfriend. As icky as Frank can be, I must admit that he and Laurel set the screen on fire and I look forward to their scenes. But even Souza isn't sure if Laurel will make it out of the finale alive.

Unfortunately, only the showrunner himself could tell us who's going to make it to next season. Nowalk wrote multiple endings for the finale and the actors shot them all. "I don't know what they decided to go on because they did alternate endings," Souza told People. "So I don't even know what happens. I hope I'll still be in it!"

If Laurel does indeed graduate to her second year of law school, here's what I think she might be up to.

Laurel and Frank Continue Their Affair

I think I've made it pretty clear that I'm pro-Frank and Laurel (Flaurel? Lank?). It would be fun to further explore them having a secret affair that's hidden from everyone at the Keating law office, but could you imagine Annalise's reaction if she found out about the two of them? I really don't know what she'd think, but it would be a great scene.

And we already know Bonnie wouldn't be shocked, considering how much Frank loves to chase law student ladies.

Laurel Reunites With Kan and Works With Legal Aid

After a harrowing first year of law school filled with murder, Laurel leaves the Keating Five, Frank, and asks Kan if it's too late to accept his offer to work at legal aid. Kan, of course, can't say no and Laurel works at the not-so-exciting office, where there is significantly less murder and betrayal. How boring.

Or Laurel could go the Kelly Taylor way, and choose herself. Who needs these dudes? She can go off and find another (guest star) love interest who will treat her right — and maybe even get her into some trouble.