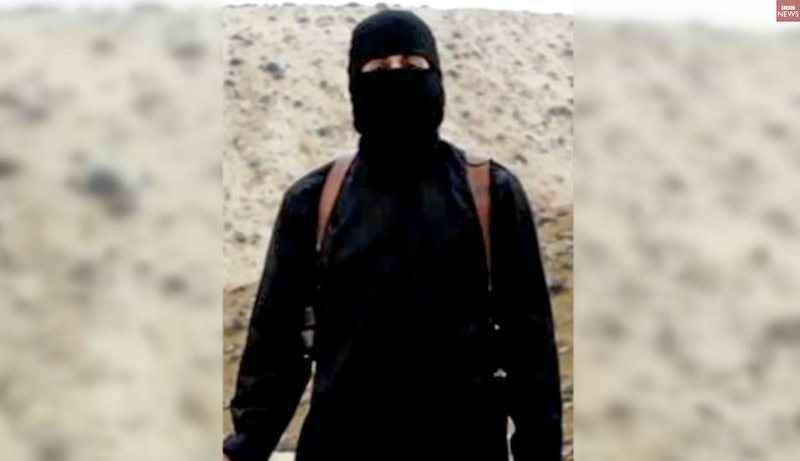 The balaclava-clad militant brandishing a knife and a British accent seen in ISIS execution videos has been identified as a 27-year-old Briton from a wealthy London family. According to BBC News, ISIS member Jihadi John is Mohammed Emwazi, a Kuwait-born but London-raised Muslim man whose name has been known to U.K. security officials.

Emwazi hails from West London, where he was brought up in what BBC News describes as a "well-to-do family." It's unconfirmed at this time how or when Emwazi found himself in Syria and became a militant member of ISIS, but it's clear that MI5, the United Kingdom's domestic counter-intelligence and security agency, knew Emwazi's name for quite some time.

BBC News has found Emwazi's name in partially classified court documents dating back to 2010. MI5 named him as a "person of interest" at the time, and another U.K. document reportedly connected Emwazi to an extremist network called al-Shabab.

According to The Washington Post, which has conducted interviews with friends of Emwazi, the 27-year-old was raised in a middle-class neighborhood and occasionally went to a mosque in Greenwich. The Post reports that Emwazi graduated from the University of Westminster, where he received a degree in computer programming. He may have entered Syria some time in 2012, but exactly when and how is still unclear.

Friends told The Post that Emwazi may have become "radicalized" in 2009, following a trip to Tanzania, where Emwazi and two friends were detained once they arrived. They were deported from the country, and Emwazi then traveled to Amsterdam, which is known to have extremist cells. There, Emwazi was reportedly detained by MI5 officials, who accused him of trying to enter Somalia to join al-Shabab, The Post reports.

Emwazi has been detained and questioned by U.K. officials several times since that episode. Reportedly angered by his treatment by Great Britain, Emwazi moved to Kuwait in either late 2009 or 2010, friends say. He was able to secure a job there, and even made plans to marry a woman he met. Emwazi allegedly returned to London just a few times since the move to Kuwait, but on one return trip, was again apprehended by U.K. security officials. They blocked Emwazi from leaving London, and he later disappeared some time in 2012.

Friends say Emwazi just wanted a new life. "He was upset and wanted to start a life elsewhere,” one friend, his identity anonymous, told The Post. "He at some stage reached the point where he was really just trying to find another way to get out."

Emwazi resurfaced in the summer of 2014, when a video of the execution of American photo journalist James Foley appeared online. Emwazi is seen as the main militant in the video, speaking to the camera with a heavy British accent and a knife in hand. Foley, dressed in an orange jumpsuit, kneels before him.

The 27-year-old has appeared in ISIS videos since then, threatening the United States and its allies. Security officials previously nicknamed him "Jihadi John," and called a group of British militants watching over the Western hostages in Syria "The Beatles" because of their obvious British identities. It's believed that Emwazi is one of the guardians of the Western hostages, including the slain Foley, American journalist Steven Sotloff and American aid worker Abdul-Rahman Kassig. Emwazi also may have been involved with torturing hostages, including using water boarding tactics.