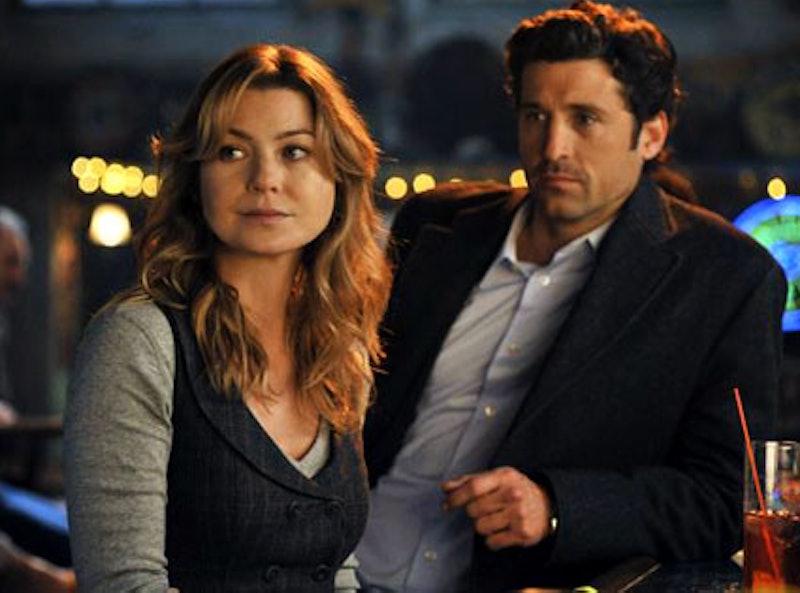 This season of Grey's Anatomy is seriously stressing me out, especially where relationships are concerned. Between Callie and Arizona getting a separation and Meredith and Derek living on separate coasts, I hate that both couples — who are usually the only ones we can trust not to be thrown by Shonda Rhimes' special brand of turbulence — are apart right now. And in last week's episode ("The Great Pretender"), it became clear that Meredith isn't pining for Derek to come back home. In fact, Mer seems to like all the alone time she's having, so much that she decided to skip out on her visit to Derek and spend the weekend in a hotel room by herself. That doesn't exactly make most people optimistic about their relationship, but I think it shows things are progressing in the right direction, and Meredith and Derek will stay together on Grey's Anatomy .

Why? Because without him, she's free to work out all the things in her head that were making their relationship suffer to begin with. Instead of being clouded by stress over Derek resenting her for not taking the job in D.C., Meredith has room to think about her job and herself — two things that have been sorely lacking in her life while she's been playing second fiddle to McDreamy. Of course, for any relationship (especially a marriage) to work, you need to be able to be your own person while also considering the other half of your relationship in all of your decisions, so Meredith will eventually have to come to that conclusion. But for now? One step at a time.

And honestly, we all know Derek was acting way out of line for a long time, even if he was cranky that he didn't get to hang out with President Obama.

For me, seeing Meredith put up that Post It in its broken frame a couple of weeks ago said all that needs to be said. She and Derek haven't forgotten their original vows to each other, and although their marriage has been put through the ringer — like many marriages have after years together — those vows definitely still stand.

And if Derek comes back and they need to amend the Post It to fit the corner their relationship has turned, that's OK too. People change, and relationships change, and that's normal. I'm just glad we aren't seeing Meredith forsake her career goals to make Derek's dreams come true, because (in my mind at least) he's been the spotlight hogger from the beginning. It's Meredith's turn to be the one making medical breakthroughs, and without Derek around, he can't take the credit.