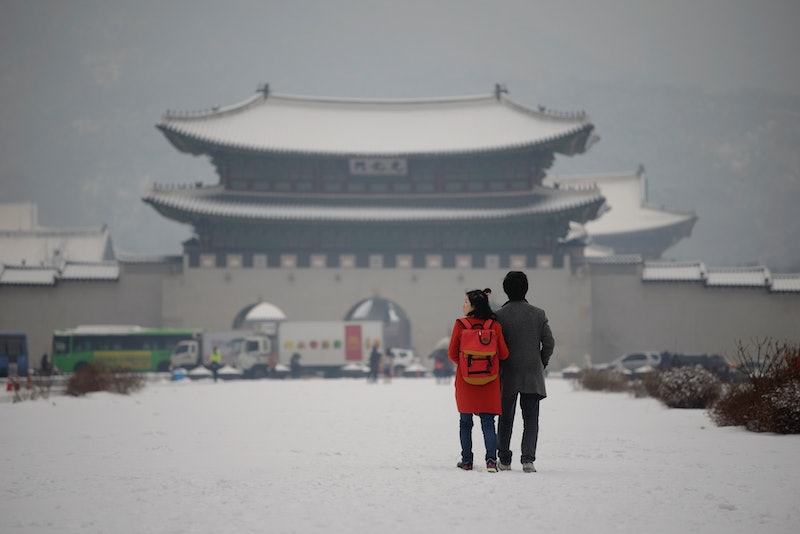 South Korea just struck down a 62-year-old law that seems like it should have been left in the 12th century. According to The New York Times, adultery is no longer illegal in South Korea, which means married couples who cheat — for whatever reason — now do not have to fear a two-year prison sentence for their loose sexual mores. This is the fifth time since 1990 that the law has been legally challenged.

The South Korea Constitutional Court struck down the law, which was instated in the early 1950s, citing the nation's evolving sexual politics as the primary reason for decriminalizing adultery. In a joint opinion, five of the court's nine justices said:

It has become difficult to say that there is a consensus on whether adultery should be punished as a criminal offense. It should be left to the free will and love of people to decide whether to maintain marriage, and the matter should not be externally forced through a criminal code.

According to The New York Times, a staggering 53,000 South Korean citizens have been indicted under the law since 1985. One of the most high-profile cases involved South Korean actress Ok So-ri, who was accused of adultery by her then-husband, popular radio personality Park Chul. Ok admitted to having an affair while married, and was sentenced to eight months in prison. However, she ended up avoiding jail time.

Ok challenged the law in the South Korea Constitutional Court in 2008, but she was unsuccessful. The court upheld the law because the justices said they were worried about the moral fabric of South Korea.

However, the nation's attitudes have been changing in recent years, and it's evident by the decreasing number of indictments under the adultery law. Although the country has continued to indict thousands of people over the last decade, The Guardian has pointed out a downward trend in adultery convictions. In 2004, state records show that 216 people were reportedly imprisoned on adultery charges; by 2008, that number fell to roughly 40 people. Over the last six years, just a handful of people have been jailed for cheating on their spouses.

Although South Korea has officially thrown out its antiquated adultery law, the act is still criminalized in several other Asian countries, including the Philippines and Taiwan. In the Philippines, the Martial Infidelity Law applies to both men and women, but women's rights activists have found that wives are much more likely to incur severe punishment under the law than husbands who commit adultery.