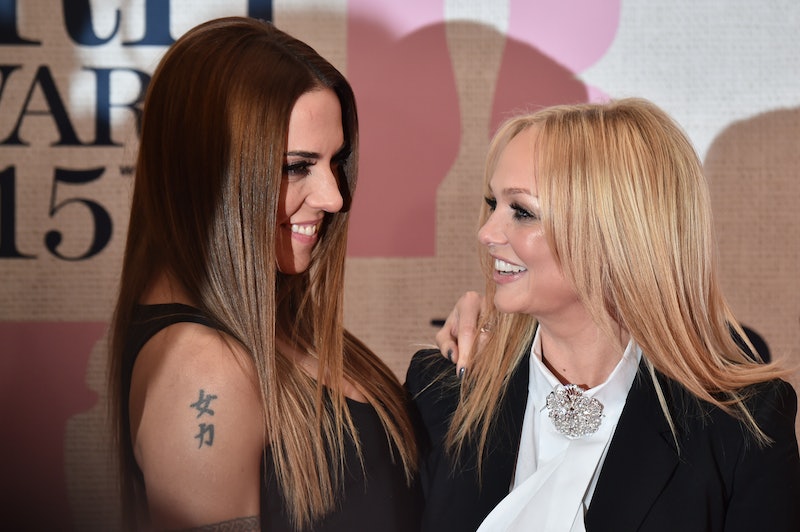 You know that feeling you get when you see a friend you haven't seen for a long time? When the memories come back so quickly, that it's almost like no time has passed at all? When you can pick back up right where you left off? Well, that's probably more or less what happened on Feb. 25 when Emma Bunton and Melanie Chisholm, also known as Baby Spice and Sporty Spice, had a mini reunion at the Brit Awards.

Not only did Baby and Sporty take a photo together while casually hanging out on the red carpet, they also shared a fun selfie. O2 shared the latter photo on its Twitter account, reminding the world of the Girls' steadfast dedication to female empowerment (as if anyone needed a reminder). Not only was "#girlpower" part of the photo's caption, Baby and Sporty even decorated the photo themselves with the words "Girl Power XO."

What more could a '90s fan girl want to see? Of course, it would be ideal if all of the fab five could be present, but with their respective crazy schedules, it would probably prove difficult. So let's take a moment to appreciate the mini reunion between Sporty and Baby. On that note, we should also take some time to appreciate some other recent mini reunions. After all, bands may split, but girl power is forever, right?

Right. Here is the photo of Sporty and Baby just hanging out on the red carpet of the Brit Awards. You know, the one that they graced 18 years ago to perform at the same awards show. This is just a casual meet up in the world of these two powerhouse women!

Also, here is the important selfie the two took later that night in the arena, proving that girl power stands the test of time. So naturally, this isn't the first time that a few of the girls in the group have had a mini reunion.

In December 2014, Geri Halliwell (also known as Ginger Spice) had both Baby Spice and Sporty Spice over for a pre-Christmas party with her man. Though there was no sign of Victoria Beckham at this party, don't worry, she hasn't been left out of all the reunions.

A recent mini reunion happened for Victoria Beckham, also known as Posh Spice, for her 40th birthday party in April of 2014. All but one of the girls was able to make it to the bash. (Scary Spice unfortunately had to give it a miss since she was busy filming America's Got Talent.) You have to respect the friendship humble brag here.

Who can forget when Baby and Sporty collaborated together at the Regent Street Christmas lights turn-on on November 2013? They performed the band's hit "2 become 1," proving that not only do they still have the friendship connection, but they still have their singing chops.

In September 2013, Mel B and Geri Halliwell (Scary Spice and Ginger Spice, respectively), had a sweet reunion dinner for just the two of them at the hot London restaurant CUT. Nothing like a good cut of steak and a bottle of wine to bond over for a Girls' night!

If the mini Spice Girls reunions leave you wanting more, you'll be happy to know that all five are set to reunite for Halliwell's upcoming wedding to Christian Horner, which is set to happen in May. If they do, it will be the first time all five have been together since the "Viva Forever" Spice Girls musical premiere in 2012. Now that will be cause for celebration!