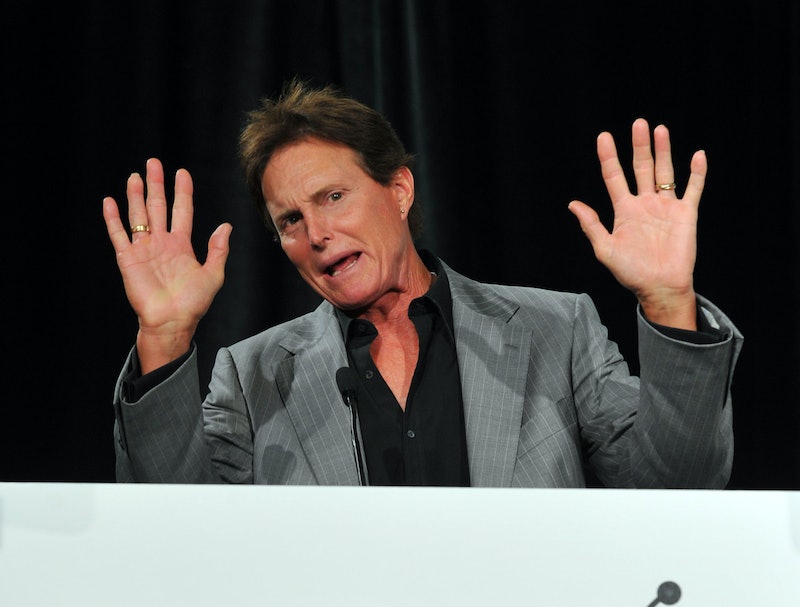 Don't expect the Kardashians to go away any time soon because they just signed a four-year Keeping Up With the Kardashians contract. But, while the core cast members are all part of the deal, Bruce Jenner will not return to Keeping Up With The Kardashians after Season 10, reports Us Weekly. Jenner's not leaving TV for good though. E! reportedly has a docu-series in the works with the former Olympian which some suspect will be focus on rumors surrounding Jenner coming out as transgender. Word is it will be completely separate from KUWTK and will not focus on Jenner's family.

But while I'll be sad to see Jenner leave the KUWTK-universe, (the 65-year-old is my favorite, next to Scott Disick) I think it's the right choice. Not only is this time a difficult one if Jenner is indeed coming out as transgender, but KUWTK was pretty hard on the former Olympian over the years: Jenner was consistently teased throughout the course of the show. Everyone was, from time-to-time, but I always felt like Jenner got it the worst. For someone who just wanted to hang out with his daughters, have space in his garage, and fly helicopters, Jenner sure was the butt of a lot of jokes.

Kris chided Jenner for not being able to hear, and took away his credit card, Khloé didn't mention she was getting married, Kylie and Kendall didn't want to go to the Olympic celebration in Jenner's honor, etc. Sure, it's a show so we don't know how much was real and how much was staged, but for the most part Jenner always looked pretty sad throughout the show.

It has to be hard to have a voice in that family when everyone is louder than Jenner is, and no one really respects his opinion. And yes, Jenner's daughters are teenagers and hardly any teens want to hang out with their parents, but my heart broke for Jenner every time they canceled plans.

So while I'll be sad to see Jenner leave the show after Season 10, I think it's the best decision. I know Jenner'll continue to be apart of the Kardashians' lives, but I think without the pressure of cameras around or potentially hurtful plot lines, they can have a much healthier relationship with Jenner.

I'll miss watching Jenner interact his crazy family, but, on the bright side, at least we'll we have the docu-series coming up, where Jenner will finally be the star.