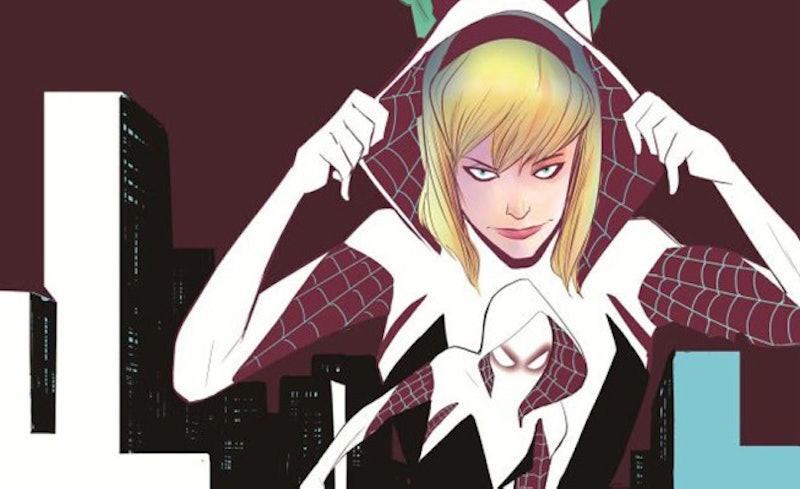 ♫ Spider-Gwen, Spider-Gwen, does whatever a Spider-Gwen Can ♫....Hmm? Oh sorry, I was distracted by Spider-Gwen , the new Marvel Comics series which hit shelves Feb. 25. The series was announced a few months back, but now Spider-Gwen has officially launched after a one-shot in Edge Of Spider-Verse #2. The alternate universe look at Gwen Stacy — in a version wherein she got that radioactive spider bite and Peter Parker died — has already intrigued many. In fact, it feels like atonement after Gwen spent the past forty-odd years as one of the most famous dead girlfriends in comics history. Now she's not only alive, she's her own hero.

As Spider-Gwen writer Jason Latour put it in an interview with Comic Book Resources back in December:

Readers literally made this book happen. It's kind of unprecedented in a lot of ways. It's not lost on any of us how special that is. [...] Everything you need to know about this book is in the title. It's Spider-powers and it's Gwen Stacy. It's both aspects, fun big melodramatic super heroics and coming of age drama.

And it's certainly an exciting concept. Here are some of the ways in which giving Gwen Stacy the space to flex her spidey-powers just feels oh so right:

It Feels Like A Sort Of Rectification Of Gwen Stacy's Fate

One cannot undo an iconic death, especially one as iconic to comics lore as Gwen Stacy's in the 1970s. She's long been one of the most famous cases of a woman being fridged (aka, killed off without reason) for her main character love interest's manpain, and it stung from the moment it happened through last years Amazing Spider-Man 2 , where they did it all over again on the big screen. That Gwen now gets to live on (albeit in an alternate universe) as a badass superhero herself? It kind of feels like penance for what a dick move what they did to her in the first place was.

It's Got Emma Stone Flavor To It

Sure, the chances of Stone actually starring in an Amazing Spider-Man alternate universe spinoff as Spider-Gwen are slim to none, especially now that Sony has officially moved on from the Andrew Garfield Spider-Man and is looking to cast a new Spider-Man with marvel. But Emma Stone remains the only woman to play Gwen Stacy in a major live-action incarnation, so come on — there's no way I'm not picturing her. She was already one of the rare great parts of Amazing Spider-Man, so it only seems natural that her charm would follow through here.

Peter Parker as a character most definitely has his merits, but we need heroes in spidey suits besides him. In 2011 we got Miles Morales, the black Latino young man who took on the Spider-Man title in the Ultimate Comics: Spider-Man series. Now we're getting spidey-type powers and a self-titled series for a character who used to mainly be considered a love interest.