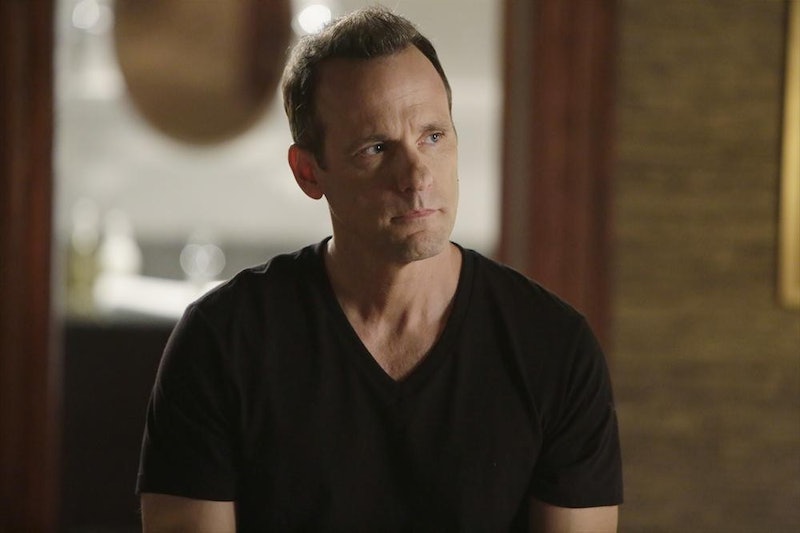 There's no doubt in my mind that the How To Get Away With Murder season finale will be chock-full of an endless array of twists and turns. Not only will Lila Stangard's true murderer finally be unmasked, but it will also set the pace for Season 2. And personally, one character I'd love to see get explored more is Sam Keating's mysterious ex-wife. As of now, we still know very little about the first Mrs. Keating other than the fact that Sam cheated on her with Annalise during their marriage. Not exactly a huge surprise given that we're already well aware of Sam's tendency toward infidelity.

We also know that Sam's sister, Hannah Keating, got along with her brother's ex-wife much better than Annalise, which Viola Davis believes is due to the fact that Annalise and Sam were an interracial couple — something that is still looked down upon in their characters' generation. "[Hannah's] a woman who just never accepted me," Davis told Entertainment Weekly back in January. "She loved Sam’s ex-wife much more than she loved me. She was more of an acceptable mate for Sam." So now that his death is under investigation, wouldn't it make sense for Hannah to call upon her preferred ex-sister-in-law to help put the killer behind bars?

Frankly, I'm a little surprised she hasn't been called in to testify yet since she'd be able to either confirm or deny Sam's violent tendencies. So what's with the hold up? Perhaps the series has a much bigger reveal in store for her. Such as…

I mean, how insane would this be? That's not to say that Sam wouldn't also be partially at fault as well, of course. (He still seems like a super shady guy even if he is technically innocent.) But what if, after finding out that Lila was pregnant, he sought advice from his first bride in the hopes that she could help get him out of this sticky situation. They may have even planned the entire murder together. Or their original non-murderous plan backfired and led to the eventual cover up of their crime.

I know it sounds crazy, but we have no idea what kind of relationship these two had together, with or without Annalise's knowledge. Perhaps he even promised to leave Annalise and go back to her if she got him out of this mess. We know he likes his women strong and formidable, so is it really that far of a stretch to think that both wives would know how to get away with murder?

Many fans have speculated that Bonnie was actually Sam's first wife, and while I'm not entirely writing that theory off, I am partially inclined to think that this is a character we have yet to meet. Plus, that would be a pretty epic twist, wouldn't it? Not to mention, it would also help explain Bonnie's weird infatuation with both Sam and Annalise. That doesn't necessarily mean that Sam is Bonnie's father. For all we know, Sam's ex-wife could've been married before or had a child out of wedlock with another man. Bonnie could've grown up idolizing Sam. Or even better, he had no idea that she even existed.

Perhaps his ex-wife gave her up for adoption. Then, many years later, a grown Bonnie tracked her down and infiltrated herself into every aspect of her mother's life, which included Sam and Annalise's relationship. Over time, she could've come to view them as the parents she never had. Or maybe her mother was the real puppet master behind all of this and instructed her daughter to spy on Sam and Annalise for her. We know so little about the majority of these characters' backgrounds, so I wouldn't be too quick to write off what other skeletons they may or may not have in their closets. When in doubt, trust no one, you guys.

She's Completely Normal With No Secrets

Then again, just because this is a thriller series doesn't mean everyone has to have baggage. But really, what fun would that be? But until that gets confirmed, I'm keeping my guard up about this mystery woman.