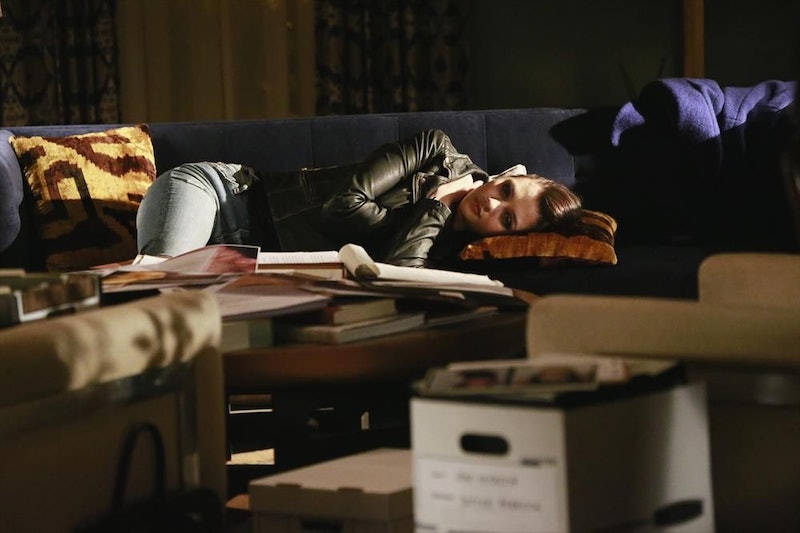 Pump the breaks, HTGAWM fans. Thursday's two-hour finale was a lot to take in, and as always, the final moments of the show were absolutely insane. After finding out who killed Lila on How To Get Away With Murder — it was technically Frank, but Sam Keating put the call in — minutes later we get the reveal of who the next season murder victim could be... and it could be Rebecca! But is Rebecca dead on HTGAWM , or is she just unconscious enough that we think she's dead until the show comes back in what will surely feel like 17 years from now? Update: Viola Davis appeared on Jimmy Kimmel Live after Thursday's finale and confirmed that Rebecca was dead, but who did it was still a mystery.

Let's set the scene. After Annalise convinced Wes — and herself, I think — that Sam was responsible for Lila's murder, she went downstairs to the basement to find Frank hanging out where Rebecca was held captive no less than 10 minutes prior. Annalise asks "if he did it," which Frank says "No, I'm not that guy. Plus, I thought you did it." What is "it?" Lila's murder? Because Frankie-boy, you did do it! I guess the only people who know that now are dead, now.

Speaking of dead, Frank asks Annalise what they should do now, as the camera pans to a lifeless Rebecca on the floor. And when I say lifeless, I mean Rebecca looked D-E-A-D. There was no life in her eyes, there was blood trickling out of her mouth. Out of all the dead bodies I've seen on television, Rebecca ranked pretty high up there. But would Annalise and Frank kill her that quickly? I know Rebecca was a loose cannon, but was she that much of a liability that they needed to take her out?

Then there's the possibility that "I'm not that guy/ I thought you did it" business could be about Rebecca's (possibly) dead body. Did someone else sneak downstairs and kill her? Wasn't Wes just down in the basement after releasing her? DID WES REALLY RELEASE HER, OR DID HE KILL HER? Seriously, Wes, are you just going around killing people now?

I don't know what to believe.