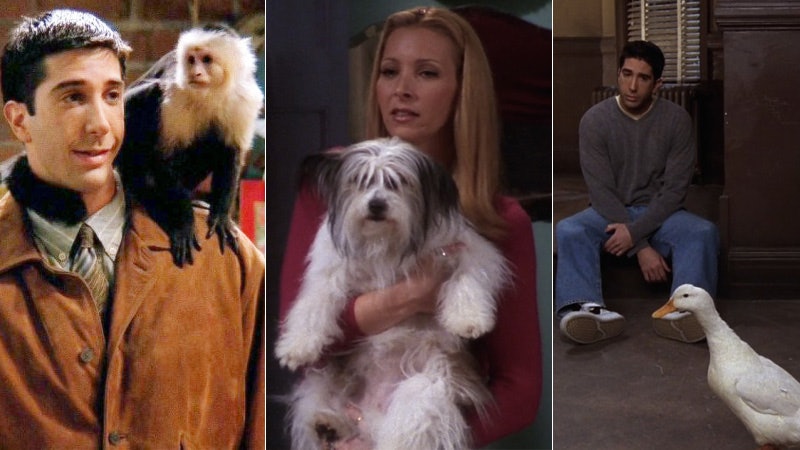 I'm afraid I have some bad news. After we've definitively ranked Friends family members, Thanksgiving episodes, Monica AND Rachel's beaus, we've neglected to rank the most important subcategory on the Friends wiki: the animals. And we need to fix that immediately.

Okay, okay, you need to stop laughing, I'm serious. I'm sure many of you think Friends is just a show about 20-somethings and the unrealistically fabulous apartments they own, but in truth, the animal presence is a big part of the show. I mean, let's be real, it that has a running joke about a song called "Smelly Cat" (although unfortunately, said smelly cat is never seen, and may never have existed in the first place). Regardless, there were a few tangible animals that made it onto the small screen, some becoming regular fixtures. Now is the time to honor them.

Before you ask, yes there is a hierarchy of animals on Friends, and I did take careful consideration in each animals' strong points when assessing them. God forbid I make these important judgement calls willy nilly. So without further delay, here's a definitive ranking of 10 (okay, technically, 11) real life animals that befriended the friends... or not.

So we're clear, this is a scary, hairless, Sphynx cat that Rachel bought for a casual $1000. She was a mean little S.O.B., possessing a volatile temper and violent nature. After one too many scratches, Rachel manages to sell it to Gunther with an additional $500 profit, so at least there's that.

Like Mrs. Whiskerson, Paolo's cat is generally characterized by the way it viciously attacks people. It actually wins points for that, as it's attack on Ross made for one of the best moments in Friends history, a silent struggle seen in the window as the other friends have sing-alongs. More importantly, it looks more like a ball of marmalade fluff and less like Mr. Burns from The Simpsons right out of a shower.

Chappy's an essential part of Mike and Phoebe's bridal party, and I always appreciate a dog in a tuxedo, but he is merely a footnote in the catalog of Friends animals.

Phoebe thinks this cat is her dead mother. Spoiler alert: it's not.

The happiest dog in the world! That is, until Joey plagues him with ceaseless whines of his Rachel problems, and Mozzarella falls into a deep depression. Though his spirit his broken, his face is still very sweet.

Ranked together because they're so gosh darn little. You can't go wrong with baby animals, but their sole plot line at the end of the show is getting lost in the foosball table. Get it together, you crazy kids.

This precious, shaggy creature won the hearts of the friends, and simultaneously helped Chandler confront his fear of dogs. Truly a Thanksgiving to remember.

The duck, one of Chandler and Joey's surrogate children, definitely gets a lot of screen time, and certainly has a majestic white coat. But he tries to eat it's brother, which is really not cool.

Besides, I'm Team Chick for life. When this baby rooster debuted on the scene, it really bonded with Chandler and Joey, Chandler especially. "That’s Yasmine Bleeth, she’s a completely different kind of chick. I love you both. But in very different ways," Chandler shares as the two are watching Baywatch together. Adorable.

But there can be only one, and the definitive best animal on Friends is an honor earned by Marcel the money alone. When he left the show, all too prematurely, it created a void that Friends tried to fill within the next eight seasons. Alas, all these attempts were in vain.