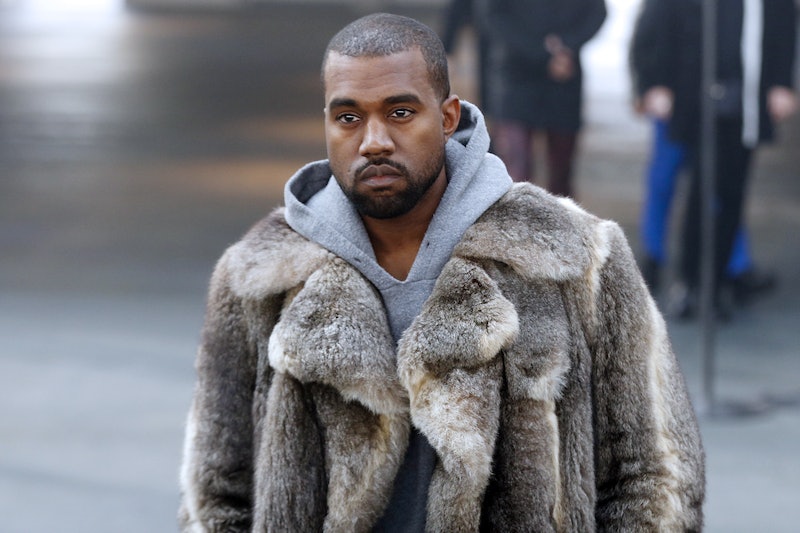 It looks like Kanye West has added to his already impressive ink collection. And this time, the ink is a special shout out to a couple of important ladies in his life. Kanye West got two new tattoos of North West's birth date, June 15, 2013, and his late mother Donda's birth date, July 12, 1949, on both of his wrists on Feb. 27.

West commemorated both birth dates with Roman numerals during a 4 a.m. trip to London tattoo parlor, Sang Bleu. Of course, wife Kim Kardashian documented the entire process through her Instagram posts before sharing the final product with her followers. Somewhat worryingly, it sounds like West was originally interested in getting the dates tattooed on his face during the late night trip. Luckily, it looks like Kardashian was able to talk him out of that one for the meantime, since he got them on his arms instead. (Good call.)

In any case, the meaning behind the tattoos is very sweet and thoughtful of West. Even though the rapper has been involved in a myriad of controversies lately, such as his almost repeated "I'mma let you finish" moment when Beck won a Grammy over Beyoncé and his involvement in the Amber Rose Twitter feud with the Kardashians, it's nice to see the tough talking rapper showing off his softer side for a change.

After all, if you are going to get something permanently etched on your skin, it likely has a special importance to you. It's a perfect way for West to honor those who have played a huge role in his life. After all, West was understandably devastated when his mother died back in 2007 because of complications that followed after a cosmetic surgery procedure. He opened up about her influence about a year after her death and was quoted by Us Weekly saying, "One of her goals was, she really supported me and she always wanted me to be the best that I could be and not get hung up on the small things. So, with her not being here to try and talk me into doing things, I … just try do things she would want me to do.”

It's obvious why he would want to think of her and her influence every time he looks down at his wrists. She clearly meant a lot to him, and it's good that he has not forgotten her words of wisdom in the past few years.

It's also sweet to see that he's dedicated some ink to his daughter as well, and it's pretty unsurprising if you think about it. After all, West has developed a special bond with North, so it makes sense that he would want to keep her on the top of mind alongside his mother. Aww! This Kanye seems a lot sweeter and more likable than the one that has ambushed awards shows and called out his ex on a radio show. Hopefully we'll see more of this Kanye in the near future. And hopefully we won't be seeing a face tattoo from him anytime soon!