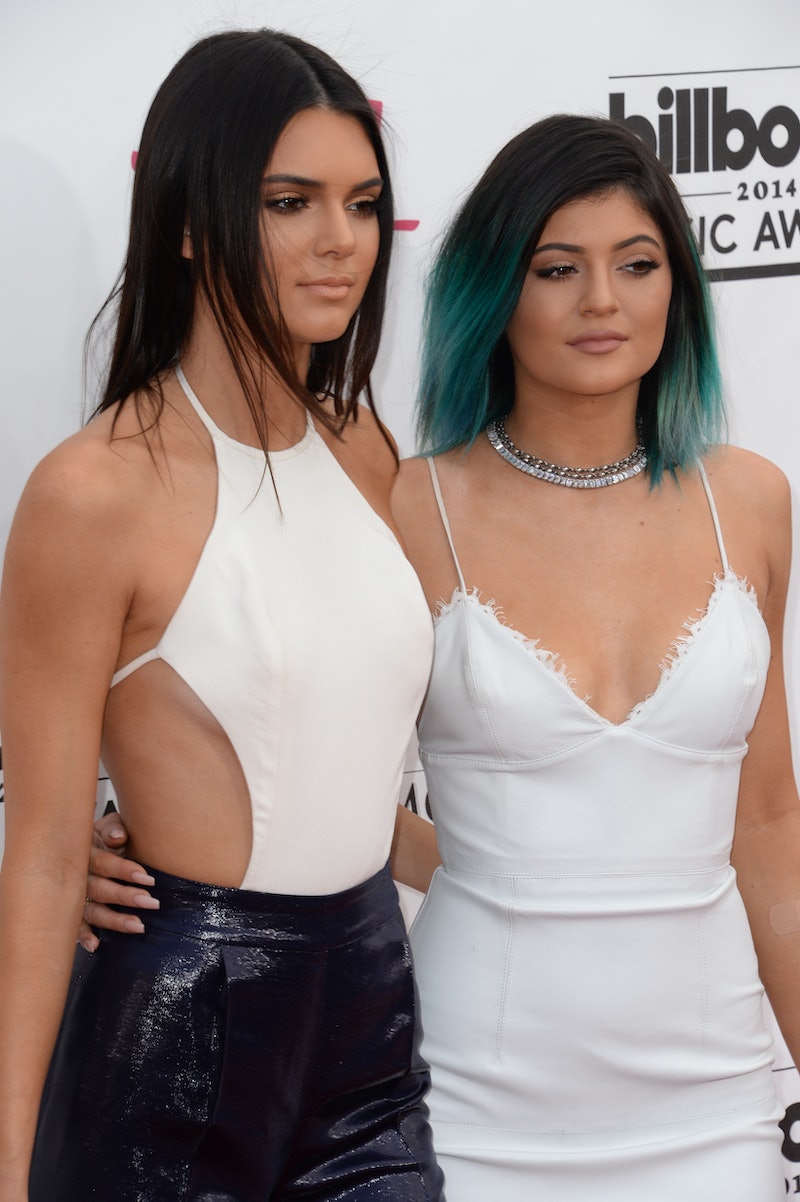 The Keeping Up With the Kardashians spinoff shows have never made much sense. No offense to Khloe and Kourtney, but they're not exactly the most exciting of the sisters; did we really need an entire show devoted to the their rants and eye rolls? Same goes for Khloe and Lamar — if there was going to be any spinoff starring one of the siblings' partners, you'd think Scott Disick: Living With the Lord would be E!'s first choice. Yet the newest (possible) spinoff is one I can finally get on board with, because if any members of the family deserve their own show, it's them; according to Variety, none other than Kendall and Kylie Jenner are being considered for the next Kardashian spinoff.

While the news itself isn't surprising — anyone paying the least bit of attention to the Kardashians this year could see that it's the two youngest sisters who are gaining fame the quickest — the timing is, considering that E! is currently working on a spinoff show about the girls' dad, Bruce Jenner. Yet judging by the amount of money the network just paid to keep the Kardashians in the family, it's clear they feel that any way of continuing the franchise for another couple of years is worth pursuing.

Which brings us to the most pressing question: if it does happen — and remember, nothing's been confirmed— what would a Kendall and Kylie spinoff actually show? I have a few ideas:

The Girls "Working" on A Book Sequel

I'm picturing them eating kale chips on a couch, watching TV, while some poor woman types 50 pages of Rebels: City of Indra — Part Two in the corner of the room.

Sure, Kendall's now pretty accepted as a model, but I doubt there aren't still some people out there who don't like the idea of a reality star walking in Fashion Week. Are they really putting their cigarettes out in her drink? Do they actually bully her when she gets dressed? I want to know everything.

There's nothing weird about a 17-year-old girl and a 25-year-old guy hanging out every once in awhile! Get your minds out of the gutter, guys.

Just because I'd like to see how the show convinces viewers that the drinks in the girls' hands are Diet Coke and that the smoke encasing the room is "for ambience."

I'm sure Kendall's a perfectly sweet girl, but judging by her family and upbringing, it's hard to imagine her hanging out with reality TV antithesis Taylor Swift. Yet apparently the two are close pals, and any good spinoff would show us exactly how that odd friendship came to be.

Who Takes Care of Their Pets

The Kardashians have so many animals. I'm only four seasons into KUWTK , and already I've seen them take in big dogs, horses, tiny puppies, a monkey, and a random chihuahua Kim found on the street. In Kendall and Kylie's parents' house, Kris (plus a team of housekeepers, I'm sure) took care of the animals when their kids forgot, but what happens when the girls move out and presumably take some of their pets with them? Who's watching Kendall's dogs when she's off in Milan? Is Kylie really able to house-train three puppies herself? Will they decide to employ the same dog-walker Kendall paid off in season 2 to do her chores for her? I'm very concerned for the welfare of these animals, and a spinoff better give me answers.

What They Really Think About Their Sisters

Whenever I watch KUWTK, I always imagine that whenever Kris isn't in the room, Kendall and Kylie just go on and on about how ridiculous their sisters are and all the insane things they've seen them do. On their own show, away from their family, I expect to hear Kardashian family gossip 24/7.