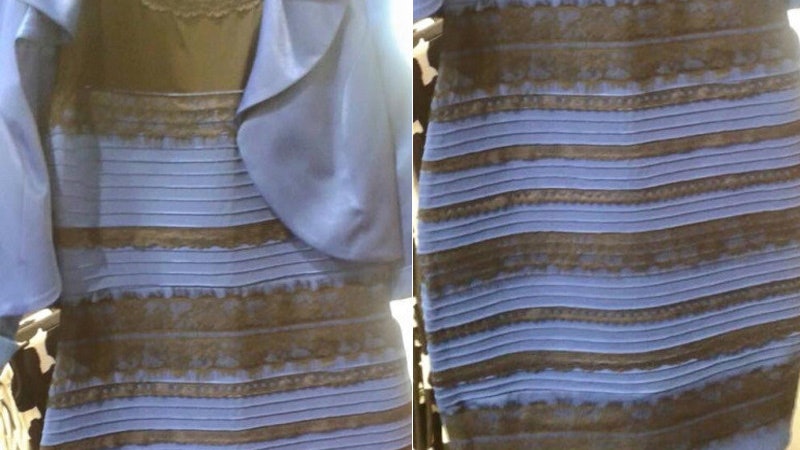 Where were you during #DressGate2015? If you had a functioning internet yesterday, or even knew someone whose cousin's best friend's mailman had access to the internet yesterday, then you were more than likely audience to the huge (and still growing) number of black and blue dress memes. There was genuinely no escaping the social media debate over what color that tragically ugly dress really is. It pretty much thrust the entire human race into an all-out civil war.

Look, guys. I'm not here to fight. Before the dress went viral, I saw it on a Twitter feed from the original poster ("I mean, I don't want to brag, but I saw the dress before it was cool.") and thought, "Ugh, that ugly dress is clearly blue add black, and also this is dumb." Two hours later, the photo had exploded. And when I looked the second time, the dress was so clearly white and gold that I would have wagered all the cheese in the Whole Foods aisle on it. I am one of the rare people who saw it both ways. I AM DIVERGENT AND I CANNOT BE CONTROLLED.

So whatever team you are on, I am on your team, because that's how phenomenally bonkers the universe is. (I am also on Team Llama Drama, and on that note, are we sure we didn't slip some Crazy Pills™ into the whole world's juice yesterday?). I know that right now we are all very upset with each other. The drama has gotten so out of control that it might be the reason for Kim Kardashian and Kanye's divorce. But while we sit back and watch the flames lick on the giant pile that was once our sanity, let us take a moment and appreciate the beautiful memes that were born yesterday. May they forever live in infamy:

More like this
Iris Law's Skunk Mullet Is Not For The Faint-Hearted
By Tomi Otekunrin
TikTok Is Using A Kendrick Lamar Song To Post Thirst Traps
By Courtney Young
What Does “Gatekeeping” Mean On TikTok? The Viral Term, Explained.
By Courtney Young
Is TikTok’s “Villain Era” Trend Just An Excuse For Bad Behaviour?
By Chanté Joseph
Get Even More From Bustle — Sign Up For The Newsletter