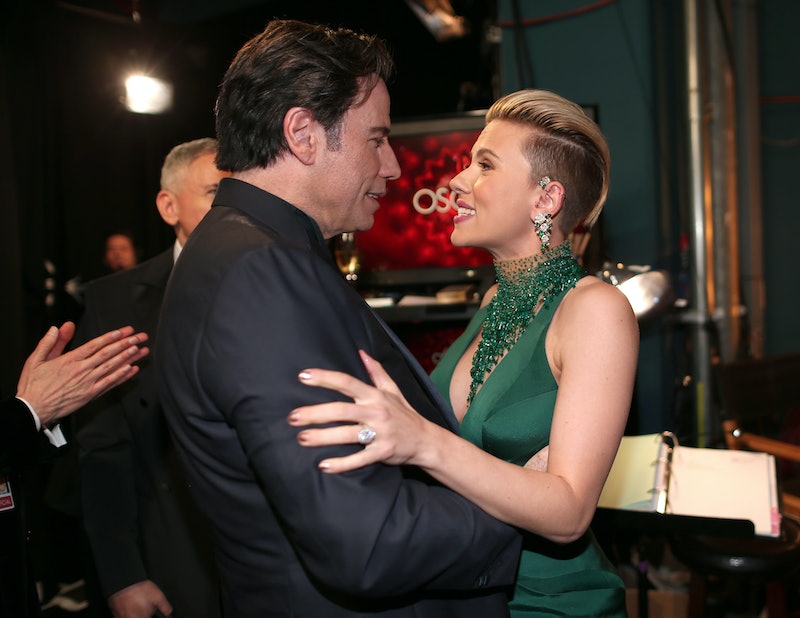 It's hard to deny that at the Oscars last Sunday, John Travolta didn't exactly seem... himself. Of course, he did manage to make a major rebound from that whole Adele Dazeem incident, but not without causing a whole different incident in the process. Not only did he awkwardly touch Idina Menzel's face while he was making his previous offense right, but, on the red carpet, he planted an even more awkward kiss on Scarlett Johansson's cheek. However, it seems like the rest of us watching at home were the only ones who thought that was a little creepy, because according to Johansson? It wasn't a big deal at all. Speaking out about her former co-star's behavior, Johansson says there was nothing creepy about Travolta's kiss.

According to The Wrap, Johansson told the Associated Press:

“The image that is circulating is an unfortunate still-frame from a live-action encounter that was very sweet and totally welcome. That still photo does not reflect what preceded and followed if you see the moment live. Yet another way we are misguided, misinformed and sensationalized by the 24-hour news cycle. I haven’t seen John in some years and it is always a pleasure to be greeted by him.”

Johansson does have a point. Being that most of us actually weren't at the Oscars, we can't exactly judge what went on in that moment just from an awkward picture... and let's give Travolta some credit. He at least managed to prove he has a sense of humor, if nothing else.

And besides, there are way creepier things than Travolta's behavior at the Oscars. Like...

Is it white and gold? Is it blue and black? I NEED ANSWERS. WHAT DOES IT ALL MEAN? P.S., I'm totally #teamwhiteandgold. Sorry.

I'm pretty sure that this version of "Happy" is going to be the soundtrack to all my nightmares for the rest of my life.

Because of him, I cannot watch this show if A) I am home alone or B) it is dark outside. Of course, I had a preexisting fear of clowns, but this certainly didn't do anything to help matters. I haven't been to the circus since this show premiered, and I doubt I ever will now.

People Who Never Use Their Turn Signals

Seriously, how hard is it for you to take two seconds out of your day to flick a little lever and let us know when you're thinking of turning or changing lanes? I promise, I'm not using this information against you. I just really want to know if I can get over.

Not only does he know when you're sleeping AND when you're awake, but he also creeps into your house and steals your baked goods. How is this OK to tell children?

What do you even do all day if you aren't quoting this spectacular movie? Do you even understand half the conversations people try to have with you? Do you know you're supposed to laugh when someone asks if butter's a carb, or do you reply with a serious answer? These are the questions that keep me up at night.

Why Kanye West Is Being So Nice All The Time

Listen, I'm just as happy that he's getting along with Taylor Swift as you are, but why? What's going on behind the scenes? Did becoming a father make him change that much that fast? Certainly he's up to something.

The Scary Toys In Toy Story

Sid was a totally demented kid to create something like this. This thing is terrifying.