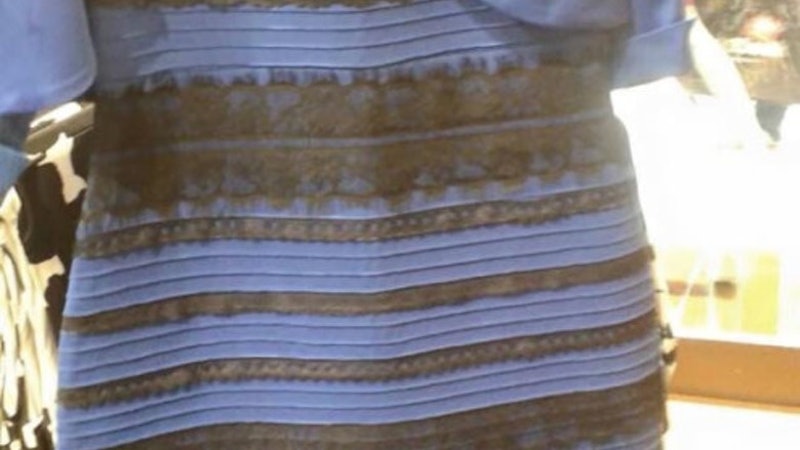 People are still up in arms about this dress that appears different colors to different people, and caused a viral controversy last night. #TheDress literally became some modern day Matrix reference: white and gold (blue pill/illusion) or blue and black (red pill/reality) — you have to pick a side! Well, if you think your mind is going berserk trying to decide who's right, there are those of us out there who keep seeing the dress CHANGE COLORS right before our eyes. And even though I now know that this dress has been tracked down and is actually blue and black, that does NOT explain why my eyes are tweaking out on me and I keep seeing it change from gold and beige to blue and black. So, what does it mean if the dress keeps changing colors?

The first time I saw this dress was last night at dinner, when a friend of mine received this picture through a group texting thread asking about the color. She glanced at it nonchalantly, before sarcastically asking me for my opinion — which was undeniably gold and beige, people. Well, for her it was undeniably black and blue. And within seconds everyone in the thread became up in arms about the color of this dress, which translated to us obnoxiously going from table to table demanding that the color be identified. When she texted me the picture so that we could split up on this, I looked at the dress again and to my horror it turned a frosty blue and bronze on me before morphing into blue and black. A@#@#AW4^%^? What, How, This.... I just.... HALP.

Well apparently, it has to do with the filtering processes of our brains as it adjusts to certain colors to compensate the surrounding light conditions. “What’s happening here is your visual system is looking at this thing, and you’re trying to discount the chromatic bias of the daylight axis,” Bevil Conway, a neuroscientist who studies color and vision at Wellesley College told the Wired. “So people either discount the blue side, in which case they end up seeing white and gold, or discount the gold side, in which case they end up with blue and black.”

So I guess for those of us who keep seeing this dress both ways, our brains just refuse to tweak colors in one singular fashion. This might explain why, even though oftentimes I first see this dress as white and gold, my brain eventually filters or adjusts the colors so that I come to see it as blue and black. Well, if that wasn't enough to reassure you of your sanity and eye health, there are videos popping up claiming that this is not a total phenomenon as other dresses change colors too. But for now, since I could admittedly do without this repetitive optical illusion from hell, I'll just do everything I can to avoid the dress that's plaguing the Internet.