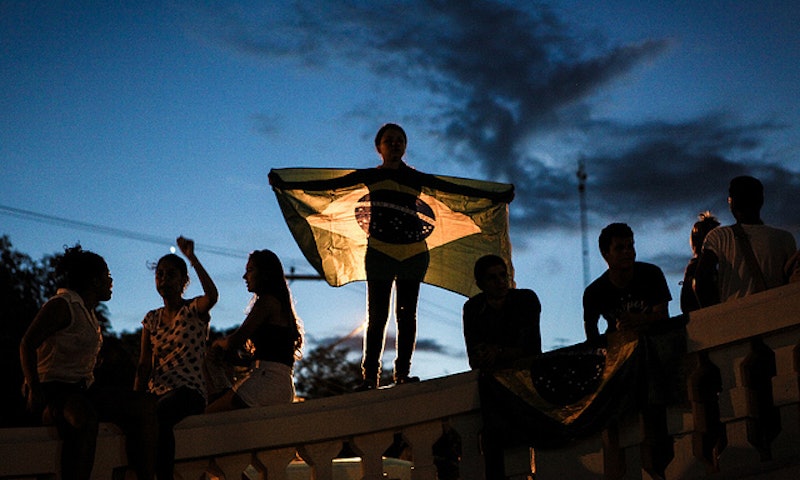 After weeks of close-watching, analyzing, and meme-hunting the demonstrations in Turkey, English-language media took awhile to acknowledge the other mass protest movement increasing in both scope and violence since early June: Big things are happening in Brazil.

Crowds of nearly 250,000 protestors have clashed with police in cities from Rio De Janiero to Fortaleza, in scenes that will make your hair curl:

Word has spread that tonight's round of protests will be the biggest yet, with even larger numbers expected over the weekend.

To demystify what's going on, here are six things you need to know about the protests:

1. It started with bus fares.

Protesting began over a hike in bus fares that stood in stark contrast to lavish state spending on soccer stadiums for the 2014 World Cup and 2016 Olympics in Rio de Janeiro; a concrete example of inflation that has been worsening for quite some time. As The Economist put it:

“More broadly, the very middle class that Brazil has created in the past decade—40m people have escaped from absolute poverty, but are still only one paycheck from falling back into it, and 2009 was the first year in which more than half the population could be considered middle class—is developing an entirely new relationship with the government. They see further improvements in their living standards as their right and will fight tooth and nail not to fall back into poverty. And rather than being grateful for the occasional crumb thrown from rich Brazilians’ tables, they are waking up to the fact that they pay taxes and deserve something in return. Perhaps their government’s triumphalism over those shiny new stadiums was the final straw.”

2. But the economy isn't the whole story.

As the BBC reports, mayors in many cities have actually conceded the point on bus fares, bringing them back down to pre-protest prices. But the move is unlikely to end protests. As one blogger in Brazil wrote, "To say this is about inflation is the equivalent of saying the protests in Turkey are about a shopping mall. It is just not the case, although it surely gave an initial spark to what was to become a bigger movement."

So what is the bigger movement? That's harder to name—literally. Brazilians can't quite decide what to call the unrest: in English, it's been called the “Salad Bowl Uprising," "V for Vinegar," "Change Brasil," "Occupy Brazil," "To the Streets,""Awaken the Giant," and, yes, "Brazilian Spring." Media seems to have latched onto the "salad" allusions, which is a reference to the police's arrest of journalists for carrying household vinegar as protection against tear gas.

But the “salad bowl” also represents the mix of issues motivating the unrest, which range from the aforementioned inflated cost of living, to longtime police corruption, to inadequate investment in education, to recent anti-LGBT legislation. One clear demand is to get Brazil's Human Rights Boss Marco Feliciano out of office, who's known for gems like ‘When you stimulate a woman to have the same rights as men, she would want to work, her part of being mother starts getting diminished … [She will] either not marry, or keep a marriage, or [have] a relationship with a person of the same sex, enjoying the pleasures of a childless union."

3. Careful with the "Spring" analogies.

Names and issues abound, but as Reuters puts it, we can cross at least one off the list: this protest is more "Occupy Wall Street" than "Tropical Spring." According to data from Brazilian pollsters Datafolha, "protesters are not targeted at a specific leader–or even the federal government. Just a quarter of demonstrators told Datafolha they were protesting against politicians—behind bus fares (56 percent), corruption (40 percent) and police repression (31 percent)."

Yes, there's an thread of anti-government sentiment linking Brazil to protests in Turkey, Egypt, Libya, and Syria. They're even using the same, Brazilian-manufactured teargas in both places.

4. Brazilian media took a long time to catch on.

At first, protestors on Facebook and Twitter criticized major Brazilian media outlets for their minimal and condescending coverage. They even called for a boycott of television giant Globo. A big boycott.

But then things got violent. And as the violent images circulating on social media inspired more protests, major media sources began to cover the story.

"There's a lot in the media, both domestic and international, [saying] that Brazilians surprised political leaders with the demonstrations. But the truth is, I think they surprised themselves. After putting up with so much for so long, the spell was finally broken: the spell of bread and circuses, of soccer and novelas...When police attacked innocent people, and importantly, members of the media, it was the final straw. The shift in public opinion was swift, and critically, even Globo—the dominant news network—changed its tune to some degree. And attempts by soccer heroes Pelé and Ronaldo to essentially appeal to protesters to take it down a notch have backfired spectacularly (at least on social media) in a testament to how deeply people relate to demonstrators."

Not all soccer players have come out against the protestors. The hero of last night's game against Mexico, Neymar, said: "The only way I can represent and defend Brazil is on the pitch, playing football. From now on, I will enter the field inspired by this movement."

The polling group Datafolha notes that 84 percent of protesters lack specific party affiliation, more than half are 25-years-old or younger, and 22 percent are students. As a result, social media is key: 81 percent heard about Monday's protest on Facebook.

However, one big rallying cry has been "#vemprarua," or: "get off Facebook and go to the streets."

6. Look to the rest of Latin America for context.

Brazil's South American neighbors have been roiled by countless protests in the past decades, but Brazil hasn't seen anything like this in at least 20 years. Brazil is Latin America's largest economy, and as Time Magazine's Tim Padgett muses, "Maybe [Brazil has] also learned from recent events in Chile, where protest-generated issues like education reform and more equitable distribution of vast mineral wealth dominate the November presidential election. Or in Mexico in 2000, in places like Venezuela and Argentina today, and possibly in increasingly affluent countries like Peru tomorrow. Here’s to hoping that the Latin American delusion— the notion that new wealth obscures old incompetence—will finally die out on the streets of Brazil."

Have you read anything particularly insightful, thought-provoking, or perspective-changing on the Brazilian protests? Tweet at us! I'll keep the list going with your suggestions.