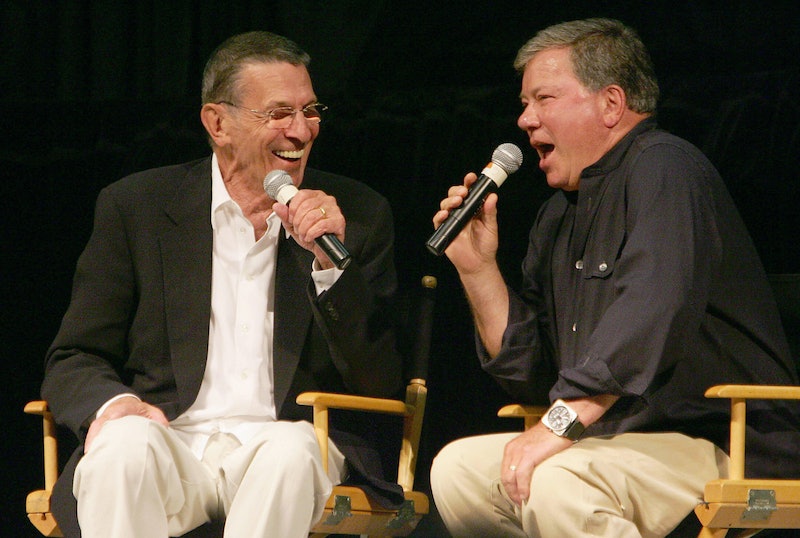 Don't mind me, I'm just over here sunken into a stupor by the news of Leonard Nimoy's death this morning. I grew up watching him as the half-Vulcan half-human Mr. Spock in old episodes of Star Trek: The Original Series, so I'm pretty much destined to spend all day tearing up any time I hear anything resembling a reference to "live long and prosper." It happened when I first heard the news, it happened when I saw Zachary Quinto's touching Instagram tribute to Nimoy, and it's happening again now as I recall that Nimoy was supposedly going to reprise his role in the third film in J.J. Abrams' series of Star Trek remakes.

Although Abrams himself will be busy with Star Wars, and thus handed over the writing and directing reins to Roberto Orci, the trequel in the franchise is scheduled to come out in 2016, and, according to rumors, Nimoy was to appear in it opposite William Shatner. Though Nimoy didn't have any projects in the works according to his IMDb page and hadn't appeared in many projects as of late, he often returned to the Star Trek franchise: In fact, his last role was actually as Spock in 2013's Star Trek Into Darkness.

There's no telling whether the rumors had any basis in reality or not, but many outlets speculated that production would begin in spring or summer of this year, which, if true, means that filming was only a few months away.

Nimoy passed away in his Los Angeles home on Friday at the age of 83.