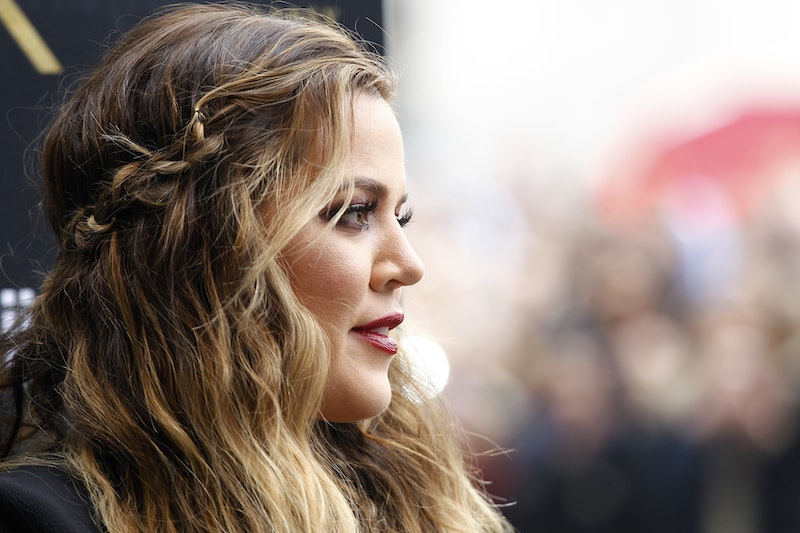 Khloe Kardashian has always been my favorite Kardashian (she's the funniest by far, in this writer's personal opinion), but I also have to give it up to her for being open about her journey to body-acceptance. On Friday, Khloe posted a pic on Instagram of her workout results, looking super fit and super slim. She also posted a photo from the past to show her progress, but the real gold was her long caption where she shared her personal experience with fitness and self-love. "We all have different journeys in life, make sure your journey is for you and you alone," she told her fans. It's especially encouraging to see such a positive message about self-esteem from Khloe, since she's talked in the past about her struggle with it.

She addressed the media scrutiny that's put on the Kardashians constantly, saying that people used to "call her the fat one," even though, when she looks back at photos of herself before she began working out regularly, she didn't consider herself "fat." And she definitely was not! But being a woman in Hollywood and being a Kardashian has its pressures, especially when it comes to body image. In an interview with Cosmopolitan UK in 2013, Khloe said that she remembers hearing her mother Kris tell a friend that she wished Khloe would get a nose job — when she was only nine years old.

"Words are the most powerful weapon; they can leave scars forever. She didn’t mean harm, but I was shocked; I hadn’t even thought about it," she told the magazine. And what nine-year-old would think about plastic surgery? It's sad, but even for Khloe as young as nine, she had a public image. But! Thankfully, even though she's right that words can scar, Khloe said that she's glad she never got the plastic surgery. "Life is about how you process things," she said. "You only live once so let’s make that one time perfect. We can’t fix our mistakes and imperfections, so let’s have fun. You get what you give out in life." Pretty great words of wisdom.

Her Instagram post on Friday also encouraged her fans to be patient, dedicated, and strong, just like she has been. She also emphasized that although she's happy with her new look, she's more happy with her new lifestyle and the peace and strength that working out regularly has brought her. "I genuinely enjoy sweating out my frustrations and living a healthier life. My workouts are not all about vanity. They are about clarity for my mind and soul," she said.

It's great to see Khloe with such a renewed sense of peace, determination, and focus on herself and her own health (mental and physical) rather than comparing herself to others — which is so hard to do. She told Us Weekly back in 2011 that it was especially difficult growing up and being "bigger" than her petite sisters, Kim and Kourtney. "They are 5-foot and 5-foot-2, so I look massive next to them," she said, revealing that her struggles with weight started to really hit after her parents, Kris and Robert Kardashian, got a divorce following the O.J. Simpson trial in which her late father was Simpson's attorney.

That's what makes her Instagram post on Friday all the better. Being vulnerable about your body-image when the whole world's eyes are on you is difficult, and sharing your journey with the public is even more courageous. "Remember, in the end, the turtle won the race," she wrote in her caption, and there's so much truth in that.