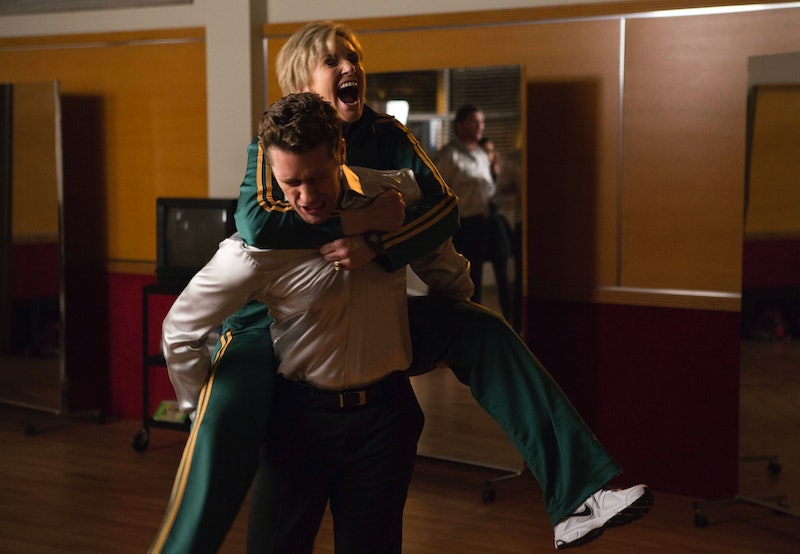 Honestly, can I say the word "finally" loud enough? On "Child Star," Friday night's episode of Glee, Will Schuester finally started to use that same sassiness and mix of dark humor & insult-giving that Sue has inflicted upon so many, especially Will himself, and it's about damn time. This season yet again Sue has made it her mission to destroy the glee club because apparently it ruins her perfect school, and frankly this act is just so boring now. But when Sue once again threatened and made fun of Will Schuester and his very obvious butt chin, Will finally fired back by giving Sue a ridiculous nickname and retaliating with his own twist on the classic Sue ridicule and insult them technique of justice. And while Sue hated the taste of her medicine so much that it literally caused her to jump on Will and physically attack him, as well as swear an even deeper and greater revenge than ever before, I actually think that in the end, this type of tit for tat will strengthen their relationship.

Think about it this way, Sue has always made fun of Will about many different things — his well-established butt-like chin, his white-guy jheri curl — but more so than anything else (especially this season), Sue has given Will an insanely hard time about his overwhelmingly optimistic spirit about the future of his kids, and his borderline obnoxious-level of naivete. But when Will not only stood up to Sue but actually gave the snark right back to her, she was taken aback by the lack of the overly nice persona and the addition of the biting wit. I'm sure in the back of her mind, Sue actually appreciates that, and frankly so do I.

For so many years, Will has been a sweet but just kind of annoying guy, and he has not been super necessary in the later seasons especially. He rapped too much, he let his emotions overboard too much, he sang with his students too much and he got trampled on by Sue too much. Even when he stood up for himself and the kids, he always had to do it with some boring speech that never really worked on Sue, or go running to Principal Figgins, or just try to get around Sue in some insane way. As bad as this may sound, his noble attitude was just... sort of boring. Honestly, how much can a person really take without eventually exploding? So to see Will actually getting tough, getting snarky, getting on the same level as Sue would really be something fun to explore. And it would be really interesting to see Sue start respecting Will for his passion and intensity, rather than just mock it.

In the Glee episode, "The Rise and Fall of Sue Sylvester," it seems Sue and Will go head to head some more and Will is definitely not backing down from the heat we saw him bring Friday night. And I for one am really glad. It'll be nice to see Will actually fight his heart out in any way possible with Rachel, Kurt and the others to keep the New Directions around. But more importantly, it would be really fun to see Sue actually get put in her place by Will after a long while. Maybe it'll help relieve some of her anger towards Will and actually help her see that a proper friendship and a proper work relationship between the two would strengthen her life. Glad you have your spark back Schuester. Your admirers have been waiting too long for this day.