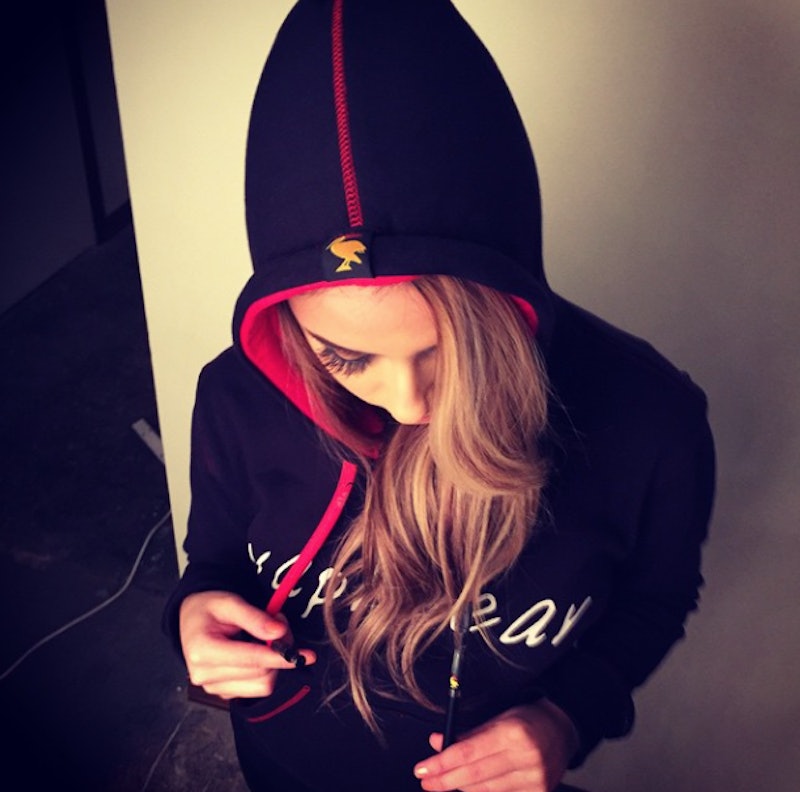 Great news for people who love chewing on hoodie drawstrings and smoking marijuana! The hoodie that you can smoke weed with exists and it may very well revolutionize your life. Whelp, maybe I'm exaggerating a little. In reality, it'll probably just take the edge off and make you a little hungry.

As BuzzFeed reports, two companies called Hood Horkerz and vapRwear have the monopoly on apparel with weed-smoking technology, and they're currently duking it out over who invented the concept. While both companies sell hoodies that double as paraphernalia, there are slight differences in design and functionality between the two versions. The Hood Horkerz model has a glass bowl at one end of its drawstring, and a mouth piece at the other and costs $124.20. The vapRwear version has a vaporizer at one end of the drawstring, and a mouthpiece on the other and costs $99. Important distinctions to note.

Horkerz owner Sean Oliver claims to have dreamt up the bowl-hoodie and the vape-hoodie in 2011, but that he opted to put the bowl version into production because it was cheaper to make. Elvis "Papi" Andrews, the inventor of vapRwear, argues that his take on the design is an improvement of the Horkerz model. "I invented the [vape sweatshirt] on 4/20 in Denver last year," Andrews told BuzzFeed, "I saw Sean and his partner, I knew their hoodies, and I knew how to make them better."

As you can see, the lady in the following picture seems to enjoy her Hood Horkerz tremendously.

While the following mademoiselle is a firm member of the vapRwear camp.

This gentleman even opted to style his vapRwear hoodie with a chambray blazer. Snazzy!

Ultimately, it seems like the disagreement is really harshing everyone's mellow. Very un-chill news about something that is supposed to really chill you out.