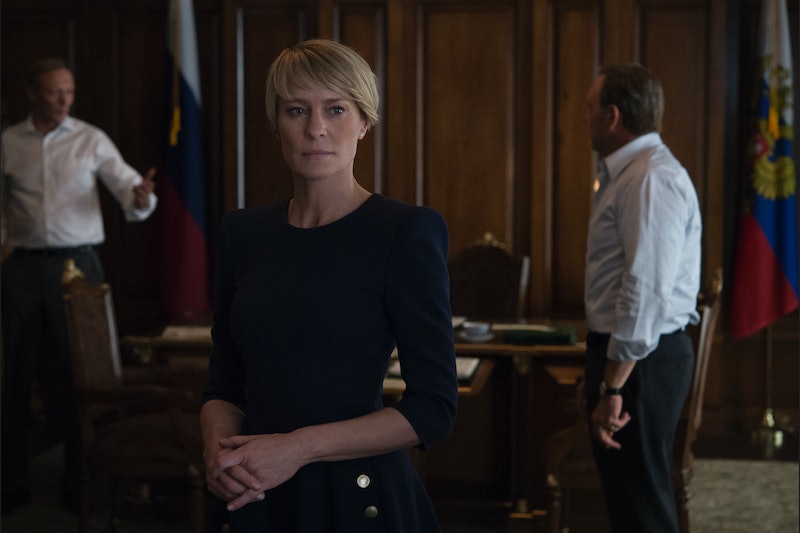 The nation's capital is an evil, terrifying place built on exchanging favors and shady alliances. At least that's how it is in House of Cards. I would love to believe that everyone running our country is inherently good with the drive of Leslie Knope, but I know that can't be true. They probably aren't all snakes like Frank Underwood either, but I'm sure there are a few bad eggs in the bunch. But Frank isn't the most interesting or the most evil character on House of Cards. In fact, in House of Cards Season 3, none of the men hold that title. The ladies of House of Cards are the true leaders in Washington D.C., even when their job titles don't reflect that.

These women either directly control the fellas in leadership roles, or they have earned the top roles themselves. Letting fear stop them from taking chances isn't an option. They know what it takes to survive and to climb, and they will do whatever it takes to reach their goals. There isn't just one heroine on this show, because all of them are praise-worthy in their own ways.

And because I just can't contain myself upon finishing Season 3, here are the ladies of House of Cards, ranked by their bravery, bold choices, emotional complexity, and overall level of badassery.

Ayla isn't afraid to make the President own up to his mistakes, even if it means getting her press credentials in the White House revoked. We didn't see much of her this season, for that reason. She took a chance and told the truth, and she got the boot. But it didn't matter, because her willingness to cross Frank makes her an amazingly courageous specimen.

Poor Rachel. Her life was pretty terrible until she met a man who wanted to save her. Except that he didn't save her at all. Doug is probably the scariest person on the show, which says a lot since everyone is terrifying. But because she dared to leave him and refuse his version of "protection" he spent all of Season 3 trying to track her down and then killed her and buried her in a ditch. Before she died though, she bravely escaped Doug's clutches because she knew she deserved better than the messed up relationship they had established.

She exudes the level of class that only the Queen could match, and yet she's a beer pong champ. The scene where she plays a round of pong with Claire and wins is the highlight of the entire season.

She just wants to reach the top, that's all. So there are moments when Jackie weakens and cowers to Frank in exchange for the promise of power. Ultimately though, Jackie chose to quit the BS this season and shockingly endorsed Heather Dunbar as Democratic candidate, despite Frank's offer to make Jackie his VP as long as she did whatever he asked. Attacking Heather as a mother and a woman at the debate sickened Jackie, and it was the last straw. Deciding that you deserve better and don't need to tolerate disrespect from someone is one of the most freeing moments in life. She took the chance and made her life better.

Kate Baldwin is a tough-as-nails journalist who takes Ayla's place after she gets kicked out of the White House press room. But silencing Ayla to avoid bad press was a huge mistake, because Kate came onto the scene and hit 'em twice as hard at every turn. It was a beautiful sight to behold.

She ran against Frank for the 2016 candidacy and for the most part, she did it honorably. She couldn't be bought with shady deals, and she didn't want to make those shady deals herself in order to secure her name on the ballot. She did almost expose Claire's lie about her abortion, which would've made her an awful human, but Doug destroyed the journal and kept that from happening.

I mean, was there ever any doubt? Claire Underwood is on a whole other level of badassery than the other women. She is self-serving, sometimes evil, but always oozing with grace. This season, she grew tired of building Frank's political career and focused on her own. She wants the title of POTUS, rather than playing the happy and supportive wife to the most powerful man in the world. In the end, she left Frank, and it seemed like it was the first step in her journey to the Oval Office, but only time will tell.

Honorable mention, of course, goes to the late Zoe Barnes (even if she never made it Season 3), for digging for the truth even when it came at the ultimate price. And for comments like this: