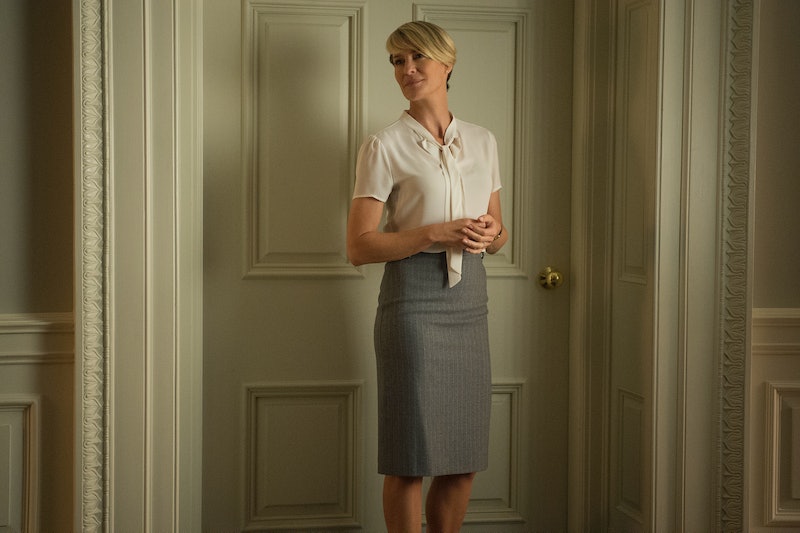 Let's get one thing straight, I do not consider House of Cards to be a feminist show. But House of Cards Season 3 gave us more than a few badass quotes to remember it by. For starters, we got to see much more about Claire Underwood beyond her icy exterior and the other female characters — Heather Dunbar, Jackie Sharp, etc.— stepped up in a big way, adding some sorely needed well-established female characters. Be honest: Frank Underwood was the least interesting thing about this season (I mean, can we just make the whole show about Claire instead? Robin Wright is killing it.) Season 3 of House of Cards is all about the ladies. Of course, spoilers will follow.

Claire's arc this season dealt with her wrestling with living in Frank's shadow as he assumed the presidency. Her bid for being a UN Ambassador wound up backfiring and she learns that they're not quite the team she hoped. She grew tired of living in his shadow, while Frank was hellbent on keeping her there since it benefits him greatly. But this season it became more obvious than ever that without Claire, Frank would never be the man he's become. The twist is that I honestly think she could survive without him. And judging from the Season 3 finale, in which Claire leaves Frank, Mrs. Underwood agrees with me.

So while I still think calling House of Cards a feminist show is inaccurate, the show is definitely playing around with feminist themes. And here's all the proof you need:

"It's Always Nice to Have a Man's Opinion" - Claire Underwood, Queen of Shade

All the feminism in this scene is pure subtext. But it is glorious. Claire is proving that she can rock the UN Ambassador position while undermining how that Russian official continuously put her down for even trying by highlighting her beauty and saying she should just stick to being first lady.

Can you think of any other character on the show who could pull off peeing in a woman's bathroom and intimidating a dude at the same time?

"Calling A Woman Sexist While A Man is On the Stage..." - Jackie Sharp

Look, many of these quotes can't exactly be emblazoned on tote bags and sold on Etsy. This was especially the case with an exchange between Frank and the show's most underrated badass, Jackie Sharp.

The two were discussing how they would handle the first presidential debate when Frank said Jackie needed to accuse Heather Dunbar of sexism when when she targets Claire. Jackie of course pushed back. While she ended up giving into Frank's request, their heated exchange articulates how the women in the political universe of House of Cards often must sacrifice their beliefs to get ahead.

I have always felt the storyline surround Rachel was dead weight on the show. But her monologue to Doug in hopes of saving her life is extremely sad and articulates her desire to become a better person with a simpler life. The sad thing is that her dream could have happened if the overwhelming machinery of patriarchy and politics didn't destroy women like her all the time.

"To President Petrov and His Little Pickle" - Claire Underwood

It seemed like so much of Season 3 involved men underestimating Claire and trying to label her in ways with which she wasn't comfortable with. A prime example of this was when the Russian President straight up said Frank pimps out Claire to seduce his obstacles on some level. Considering the high stakes of President Petrov's lavish visit Claire couldn't really tell him how she really feels. Instead she makes a pointed toast over vodka saying "To President Petrov and his little pickle." I would have set off a world war if I was in the same situation.

"I Should Have Never Made You President" - Claire Underwood

This line spoke to my spirit. Frank Underwood has gotten mighty full of himself, no? Well, Claire decided to put him in his place during just one of their many arguments on Air Force One. After all, Frank wouldn't be president if it weren't for his scheming wife.

"I Would Never Do This to Another Woman" - Heather Dunbar

One of the ways that Doug tried to get into Heather Dunbar's good graces was to reveal information about Claire's abortion that she could use as leverage. But Dunbar wasn't having it.

Of course, Dunbar's desire to stay above the fray of political mudslinging soon goes by the wayside when she realizes just how much she wants to be president. Frank rightly pointed out that she's become just like all the other men in smoke filled rooms willing to destroy anyone and everyone for power. But for a brief moment, Dunbar was one of the few real good guys on the show. But let's be real, we'd all still vote for her over Frank.

"No, You're Not Enough" - Claire Underwood, spilling the truth to Frank

We can all agree Frank Underwood is the worst, right? Sure, Claire has done her fair share of absolutely horrible things but this season went a long way with giving her character more layers especially when it came to her relationship with Frank. This scene had their most brutal argument thus far with Frank physically restraining her and in many ways denigrating her importance. Oh Frank, you'll learn next season how worthless you are without Claire.

Did anyone else fist pump when this happened? What began as two diabolical with a seemingly insuperable bond has become much more human. Witnessing Claire question her choices and her position in Frank's life only to make the decision to leave him at such a crucial point in his campaign. claire Underwood should team up with Jackie Sharp to take down Frank — after all, he undermined and undervalued both of these exceptional women.