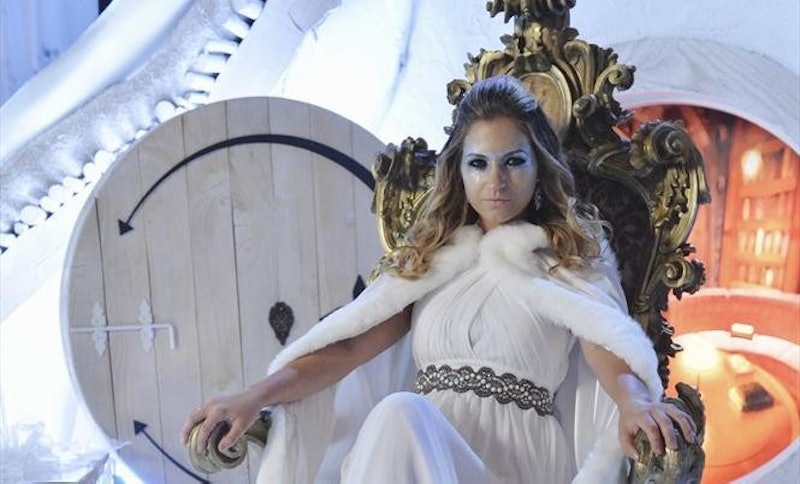 As if Pretty Little Liars viewers weren’t tense enough from all of this “we’re-so-close-to-finding-out-who-A-is” business, I. Marlene King has thrown another problem to solve into the ring: Who in the world is Varjack on Pretty Little Liars ? While most people assume Ezra is our guy, I'm convinced that CeCe Drake is actually Varjack.

Last week, when Aria and Hanna went to visit Ali’s old boyfriend Cyrus in the hospital, the very badly burned Dave from Happy Endings lookalike could only write out the word “carjack.” The girls took that and assumed that it meant he was attacked and left for dead at the scene of a carjacking, until brilliant, sweet Hanna realizes that “c” is a “v” and the note actually spells Varjack, who is the male lead in the Audrey Hepburn flick Breakfast at Tiffany’s (it’s actually spelled Varjak, but if I were burned all over my body, I hope I could get a spelling pass).

Now, I know what you’re all thinking: once, when that as-bad-as-George-and-Izzie pairing of Alison and Ezra was going on, Ezra referred to Ali as his Holly Golightly, aka the female lead from Breakfast at Tiffany’s. Case closed! Ezra is Varjack, Finkle is Einhorn, and we can close the book on this. But this theory is just too easy, and the fact that viewers have even thought of it means it won’t happen. I. Marlene King is always watching, you guys.

But this does all boil down to Audrey Hepburn. The name of the penultimate episode of this season is “I’m A Good Girl, I Am,” which is another Audrey Hepburn reference, this time to My Fair Lady. In both My Fair Lady and Breakfast at Tiffany’s, Hepburn’s characters (Eliza Doolittle and Golightly, respectively) are being changed by great new human forces in their lives: Henry Higgins is trying to make Eliza Doolittle into a lady, and Paul Varjak wants Holly Golightly to be less of an incendiary sort-of sex worker. Both women are seen as Play-Dough to mold into whatever these men want her to be. And if we look at Pretty Little Liars, who was the person that molded Ali into whatever she wanted her to be?

None other than CeCe Drake.

CeCe has always been the wild card of Pretty Little Liars. She could totally be manipulating Ali even while Ali is still in jail. She’s got resources: Even though she fled to France as Vivian Darkbloom, CeCe was back for the Pretty Little Liars Christmas episode. She must have some frequent flyer miles.

But I know you're going to need more proof, so here we go:

She’s connected to basically everyone in Rosewood, from Detective Wilden to Jason DiLaurentis (the two went to school together). She has a great influence on the liars, because she turned Ali into her pet project, who in turn manipulated Aria, Emily, Hanna, and Spencer. CeCe’s power is far-reaching.

CeCe Is A Killer

Whether she was paid to or not, CeCe killed Wilden for money, she still murdered somebody. If homegirl is a killer, all of this manipulation stuff is easy-peasy for her.

CeCe is the only person in the whole series that knew that Ali was actually alive this whole time, because of course. CeCe spent way too much time turning Ali into her own personal mini-me to not try and protect her and know everything about her whereabouts.

Do you trust Melissa? I wouldn’t trust her as far as I could throw her. That girl is scary, okay? Even Jenna is afraid of them both, and Jenna ain’t never scared.

Is CeCe Varjack? That’s my bet. Now if you’ll excuse me, I’m off to rent every other Audrey Hepburn movie and learn all of the other secrets of Pretty Little Liars.

More like this
Every Horror Movie Reference In The 'PLL: Original Sin' Premiere
By Alyssa Lapid
The 'PLL: Original Sin' Creators Say A’s Identity Will Be “Very Clear” By The Season Finale
By Alyssa Lapid
‘Squid Game’ Creator Hwang Dong-Hyuk Just Dropped A Major Season 2 Tease
By Brian Anthony Hernandez and Bustle Editors
Everything To Know About 'Westworld' Season 5
By Sophia Moore
Get Even More From Bustle — Sign Up For The Newsletter