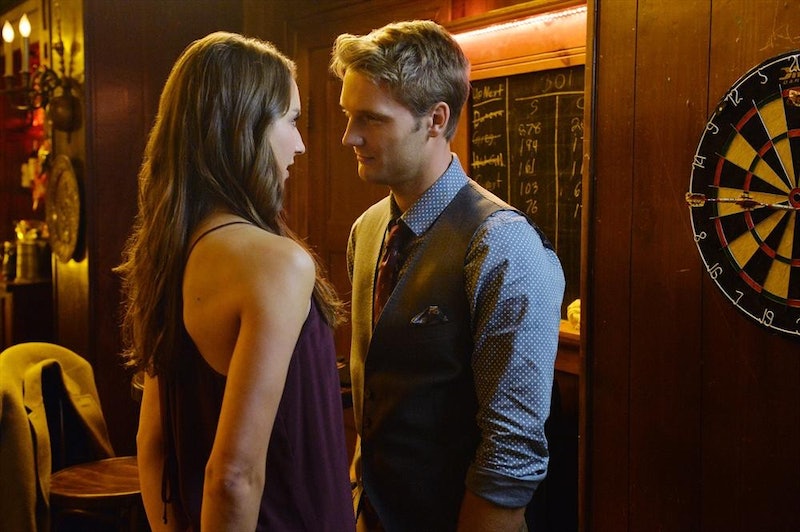 I don't know about you guys, but watching Pretty Little Liars throughout all these years has made me become extremely paranoid — and with good reason. I mean, it's become downright impossible to trust anyone on this show. (Am I "A"? Are you "A"? There's no way to know!) So until "A's" identity is revealed once and for all, everyone I meet is a potential suspect in my book and that includes Wren and Melissa's roommate, Colin, who — as you can see from the picture above — is growing closer and closer with our dear Spencer Hastings in Tuesday night's episode "To Plea or Not to Plea."

What is this guy's deal? Sure, he seems to come across as sweet and charming (as most people with British accents do), but so didn't Wren when we first met him and look how shady he's turned out to be. So logically, any close friend of Wren and Melissa's is not to be trusted either. First off, we know very little about him, which makes him super suspicious right off the bat. Second of all, does anyone else find it really weird that Wren and Melissa would have a roommate (or in this case, flatmate) at all? Wren's a doctor and the Hastings family isn't exactly lacking in the money department. So why bother with sharing with someone else when they can clearly afford a place of their own?

Unless he's not actually their roommate after all… Look, I'm not saying that Colin is actually "A" (I'm still placing that bet on either Ezra or Wren), but I wouldn't be surprised if he was one of "A's" henchmen. And, better yet, I can prove it.

I'm sorry, but there's no way that a test tube full of blood got passed airport security, which means "A" is either in London with Spencer or someone else put it in her bag after she got off the plane. Colin would be the ideal candidate for such a situation, given that Spencer pretty much hand delivered herself (and her luggage) right into his lap. It wouldn't have taken much for him to subtly place the vial into her purse without her knowing it.

What are the odds that Colin would be going to see not just a Shakespeare play (which Spencer is a big fan of in general), but her favorite Shakespeare play, Hamlet, as shown in a Tuesday episode promo? That just seems like too big of a coincidence, which means he's either trying to coax information out of her when her guard's down or he wants to get her out of the apartment for some reason. (Maybe "A" wants to plant another blood vial somewhere?) Either way, his motives certainly can't be genuine. Also, please note the "A" figurine in the image above (far right). Is that a slight hint confirming his connection to "A's" devious endgame? Just saying.

Well, to be fair, Spencer just seems to have terrible luck in general. But aside from Toby, she also has a tendency to find herself drawn to the wrong kind of men. (Like her sister's love interests, for example.) So Colin's charms could end up blinding her to his ulterior motives, whatever they may be. There's just one thing I know for sure: when someone is having this much fun on PLL, it's bound to come with a price.

Watch yourself, Spence. This Brit is more than likely bAd news.

More like this
A Is Officially Coming Back To Wreak More Havoc In 'PLL: Original Sin' Season 2
By Kadin Burnett
A New 'And Just Like That' Table Read Pic Confirms A Key Character's Return
By Jack Irvin and Grace Wehniainen
You’ll Definitely Recognise Both Of Ty Tennant’s Parents
By Maxine Harrison
Sara Zwangobani Is A Self-Proclaimed 'LOTR' Super Fan
By Frances Stewart
Get Even More From Bustle — Sign Up For The Newsletter