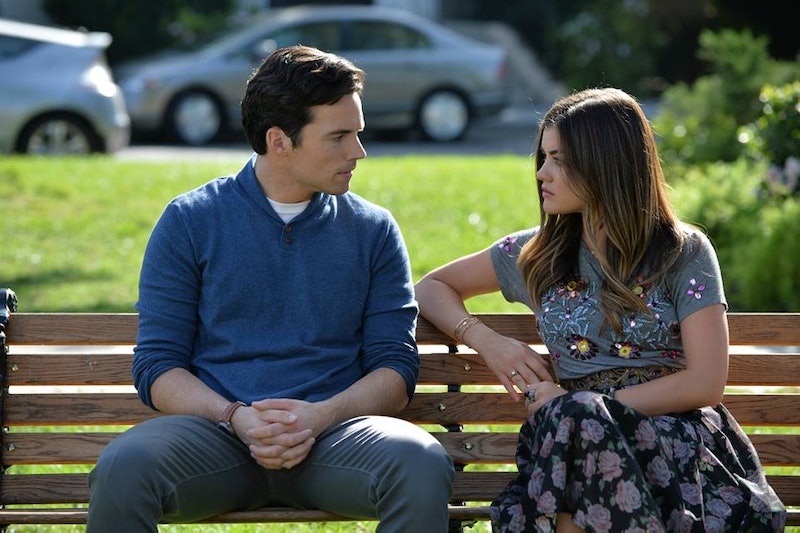 If you've been able to stop thinking about Breakfast at Tiffany's and Varjack, good for you. Because most of us PLL fans are nowhere near forgetting about the series' latest mystery. During last week's episode, "Bloody Hell," Pretty Little Liars may have revealed that Ezra is Varjack. Which would mean, after almost five whole seasons of I. Marlene King's series, that Ezra is definitely A. Or is he? The internet, specifically Tumblr, has been swirling with some truly wild PLL Varjack theories and, if I'm being totally honest here, I believe a handful of them.

Obviously, now that we've been promised an official big A reveal, the big question that PLL posed during Season 1 has returned to the forefront. OK, fine, we never stopped wondering about A's true identity — even if we've become so frustrated from time to time that we vowed to quit PLL and the madness of A. But, now that there are answers on the table, I'm all-in on finding out the identity of the ever-elusive cyber villain. So, who could it be?

Following Aria and Hanna's visit with Cyrus at the hospital during last Tuesday's episode, it surely seemed that Ezra is Varjack and Big A. But there might be a lot more to this clue that we initially thought. I mean, this is Pretty Little Liars, after all.

A Brit is Varjack

This is a theory that I find pretty interesting, though possibly a little too much for PLL to pull off. According to Tumblr user prettylittleliarsbiga, Cyrus' message might refer to the British novel Varjak Paw.It's definitely possible that Cyrus spelt it wrong, it's also definitely possible that A is a fan of British literature, but this theory is based solely on the fact that this novel is British. Which points directly at two people being Varjack — Wren and the British roommate. Wren being A has been a popular theory, but this roommate situation is a little sketchy. And that makes this theory crazy enough to work.

Aria & Andrew Are Playing Us All

I mean, we've all suspected Aria from time to time, right? Well, there are two theories surrounding the highly suspicious liar and her new friend. First, there's this interesting theory that Aria and Andrew strongly resemble Holly and Varjack from Breakfast at Tiffany's — and, again, if I'm being honest here, I kind of believe this. Additionally, astute Tumblr user jaagaga noticed that Andrew and the hospital mummy wear the same sneakers at the end of Monday's episode, "Bloody Hell." Again, not a coincidence. What if Aria went with Hanna just to see whether or not Cyrus would tell and got Andrew in there to do the dirty work? It's possible.

It'd be interesting for Cece to return at this point, which is why this theory might also be valid. As far as we know, Ali could've given Cece her former Holly Varjack passport and identity so she could run off to Europe. But that's only part of this theory — Tumblr user tremolux poses the question of whether or not Cyrus got Ali and Cece confused. I mean, they used to pretend to be one another all of the time and actually fooled plenty of people with their games. Could Cece have fooled Cyrus as well? I'm going to go with yes.

Last but not least and my personal favorite theory — Ezra is Varjack and Ezra is A. I mean, he's shifty as hell and, honestly, this Varjack situation could be a blatant reference to Ezra telling Ali that she reminded him of Holly Golightly when they first met. I mean, c'mon, people. The pieces are all falling into place and it'd make perfect sense.

More like this
Every Horror Movie Reference In The 'PLL: Original Sin' Premiere
By Alyssa Lapid
The 'PLL: Original Sin' Creators Say A’s Identity Will Be “Very Clear” By The Season Finale
By Alyssa Lapid
10 Famous People You Forgot Guest-Starred In The Original 'PLL'
By Brad Witter
Does 'Locke & Key’s Ending Mean There Could Be A Season 4?
By Sophia Moore
Get Even More From Bustle — Sign Up For The Newsletter