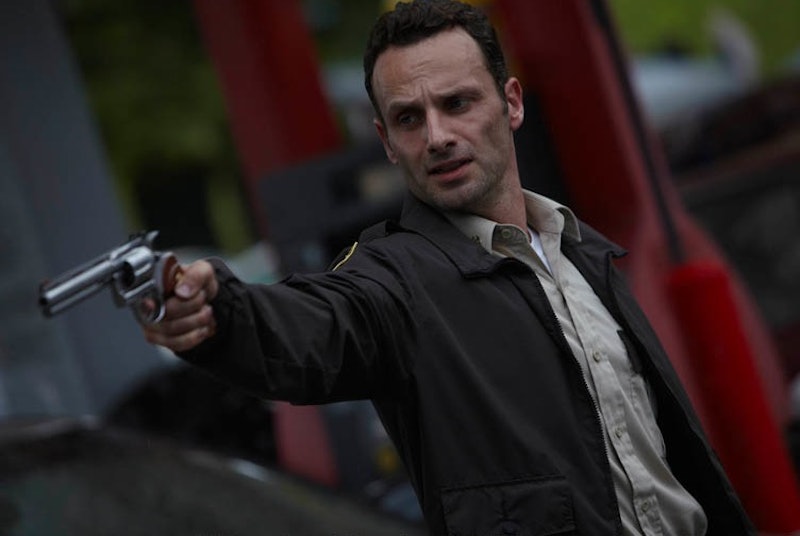 As with any protagonist of an apocalyptic future-story, life hasn't been terribly kind to Rick Grimes on The Walking Dead . Zombies have taken over the world, his pregnant wife died giving birth to their son, and his son is possibly turning into a mini psychopath because, go figure, growing up in a world surrounded by death and destruction doesn't exactly help kids transform from children into well-adjusted adults. Last season, we saw the full extent of just how broken Rick's mental state is: Since Lori's death, Rick has started seeing her "ghost" everywhere he goes, and he's hardly fit to lead the gang anymore.

Considering what he's gone through, you can't really blame the guy for going a little mad, but it does all raise an interesting question: Going into Season 4 now, with Rick's mental state pretty much destroyed, what happens now? Will Rick still remain leader? Does Rick have to die as well? Spoilers have been kept locked down under pretty secure lock and key, but we can, as always, speculate based on what we already know.

Let's be real: Rick hasn't always been the most interesting character at first glance. The story of his character development has always been there, though, and that's what we should be paying attention to — it was just always buried behind plots (like the yawn-worthy search for Sophia, for example).

In the beginning, Rick was just the good guy, the hesitant leader. He wanted to keep his family and new friends safe, but he was struggling with the idea of being as cutthroat as he needed to be in this brave new world. However, with people out there likely willing to slaughter another if it would ensure their survival, it became clear that Rick would need to change if he wanted to really protect the group.

The show spent a lot of time showing us the differences between Rick and his best friend, Shane, displaying that Shane had no trouble killing a human while Rick refused to. According to comic creator Robert Kirkman in an interview with The Hollywood Reporter during Season 2, this was exactly what they wanted the audience to take notice of:

This entire season has been leading up to the moment where he shot those two men. Shane has been beating it into his head that he isn't fit for this world and needs to be a harder man and be able to make the hard decisions. Over the last two episodes, we've seen Rick be the one that has to step up and shoot Sophia when no one else can. We've seen him in the blink of an eye take out two guys who are a very clear threat to him and everyone else that's with him. This is really the beginning of Rick emerging as a clear leader and answering that thing that Shane's been saying all this time.

In other words, the show has basically spent two seasons showing us that Rick's morals are having to slowly decay so he can protect his group and be a real, strong leader. To be a leader, Rick would have to step up, make the hard decisions, and sometimes take a human life if it means survival for his group. For a guy who used to be a cop, this was a huge character development: The whole idea of justice had to take on a new definition in his mind, and it was clear even early in the show that this was messing with his psyche.

He's been making rash decisions for a while now, and that whole conversation he had with the group in the beginning of Season 3 about how this was a dictatorship, not a democracy, didn't help prove his sanity much. Things may have come to a head when Lori died, but Rick was always struggling with this since episode one — and the possibility is very real that he could snap, and possibly turn even more evil than The Governor.

It's not clear what lies ahead for Rick in Season 4, but if I had to take a guess based on his journey so far, Rick isn't going to be able to remain as leader of the group for much longer. He's already showing signs of making rash decisions that don't necessarily protect the group, so if he doesn't pull it together, he's going to end up endangering everyone around him. Someone else will need to step up to the plate (perhaps Daryl, who has shown his ability to protect others) — as for how Rick will take that, though, remains to be seen.