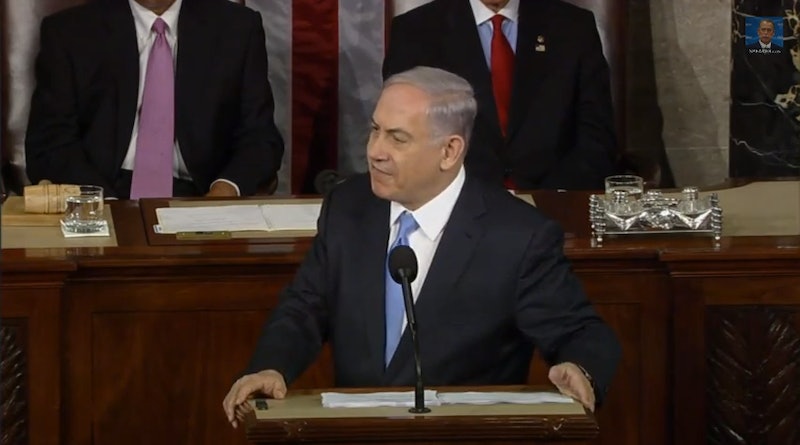 As expected, the guest speaker at Tuesday's joint session of Congress largely focused on warning Capitol Hill of the dangers of Iran's nuclear program, easing the fear of Israeli election officials that its Prime Minister would use his speech in front of U.S. lawmakers to gain political traction back home, two weeks ahead of elections in Israel. Much of the speech's content was expected — decrying a nuclear-armed Iran and Middle East and criticizing the Obama administration's nuclear negotiations with Iran — but one curious point was made in Benjamin Netanyahu's Congress speech that compared Iran to ISIS, as the Israeli leader took pains to stress the radicalism of the Iran regime.

Netanyahu pointed to the U.S.' fight against ISIS in Syria and Iraq — which, though it won't send American troops on the ground, has seen U.S. personnel deployed to the region to train their allies to fight ISIS — and said that American opposition to ISIS does not automatically make Iran (who considers ISIS an enemy) an ally by proxy. Speaking to a mostly grey-haired, Republican-led Congress, he said:

Perhaps the only unforeseen bit in the controversial speech was Netanyahu's sneaky mention of the HBO show Game of Thrones, an easy pop culture reference inserted in a speech inundated with serious political rhetoric. He said:

One calls itself the Islamic Republic; the other calls itself the Islamic State. Both want to impose a militant Islamic empire, first on the region and then on the entire world. They just disagree among themselves who will be the ruler of that empire. In this deadly 'Game of Thrones, there's no place for America or for Israel. No peace for Christians, Jews, or Muslims who don't share the Islamist medieval creed.

While foreign dignitaries addressing Congress is typically a tepid affair, Netanyahu's speech, since its announcement last month, caused deep discontent in Washington D.C. and further widened the rift between himself and President Obama. Netanyahu addressed the controversy at the very start of his speech, saying that it was "never his intention" to cause any offense, and expressed his gratitude to Obama for his support of Israel.

But his speech targeted the president's efforts at negotiating with Iran on its nuclear weapons, and drawing a comparison of Iran to ISIS was likely an attempt to suggest that the Middle East nation posed a threat on par with that of the brutal religious militants. The only difference, he said, was that ISIS is not capable of obtaining nuclear weapons, while Iran is. To repeated standing ovations and hoots of support from enthusiastic Republican lawmakers, Netanyahu thundered:

Iran could soon be armed with intercontinental ballistic missiles and nuclear bombs. The greatest danger facing our world is the marriage of militant Islam with nuclear weapons. To defeat ISIS and Iran get nuclear weapons would be to win the battle but lose the war. We can't let that happen.

More like this
Your Daily Horoscope For August 10, 2022
By Mecca Woods
The 6 Best Vacuum Seal Containers
By Cristina Sanza
'Indian Matchmaking's Pradhyuman & Ashima Have Made No Secret Of Their Marital Status
By Brad Witter
Shital Dropped Major Hints About Her Relationship With Niraj After 'Indian Matchmaking'
By Brad Witter
Get Even More From Bustle — Sign Up For The Newsletter