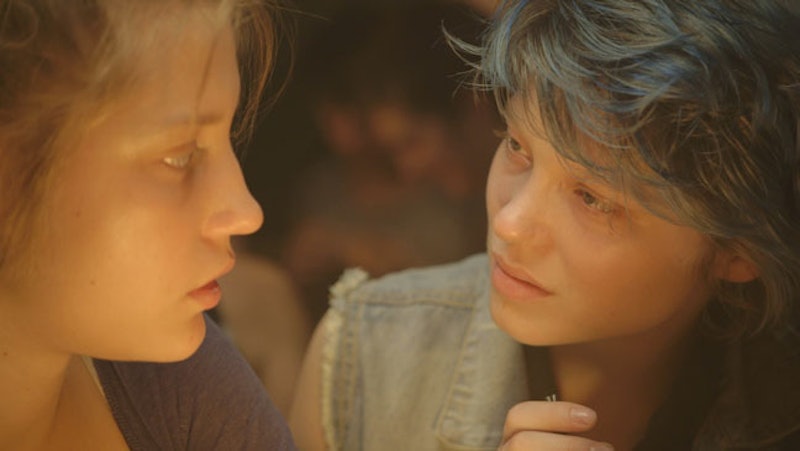 In an insane but unsurprising turn of events, the controversial and critically acclaimed Palme D'Or winner Blue Is the Warmest Color has been banned in Idaho because of a liquor law. The French romantic drama's racy portrayal of a passionate, sexually charged relationship between two women has faced several distribution roadblocks, including its limiting NC-17 rating and arthouse status, but with the exception of Idaho, is set for release on October 25 throughout the United States.

In other words, Idaho has no problem with moviegoers getting wasted in a theater so long as they aren't watching any kind of sex, simulated or otherwise. Needless to say, a film about a 15-year-old girl's extremely explicit sexual awakening when she finds a blue-haired love interest just doesn't fly in the potato capital of America.

We're thinking this ban is the best thing that happened to Blue – people love watching what they can't see, so we wouldn't be surprised if Idahoans start flooding arthouse movie theaters all over Nevada and Oregon.

More like this
Why The '365 Days' Sex Scenes Are Good, Even If The Movies Aren’t
By Arya Roshanian
Sandra Bullock, Girlboss Extraordinaire
By Matt Harkins & Viviana Olen
Long Live Bennifer!
By Allie Jones
Laura Dern Said “Cultural Awareness” Made Her Rethink This 'Jurassic Park' Fact
By Grace Wehniainen
Get Even More From Bustle — Sign Up For The Newsletter