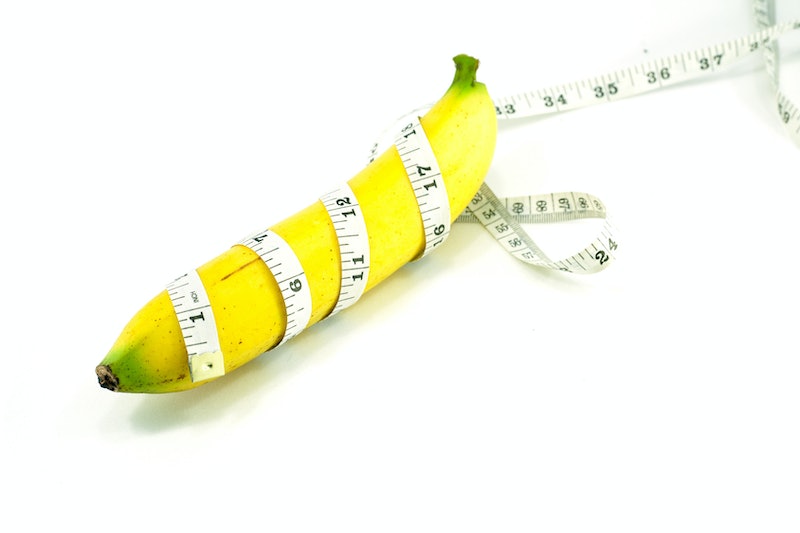 I'm just going to come out and say it: I think it's really weird that humans are so obsessed with penis size. But hey, in case you've ever wondered how big the average penis really is, new research has shed some light on the subject. And hey, guess what? It's not at all what you probably think it is. I'm going to take this as a sign that we all need to stop freaking out about whether someone is “too big,” “too small,” or whatever. A penis is a penis is a penis, right?

According to David Veale of Kings College London Medical School and his team, “there have been no formal systematic reviews of penile size measurements” — so they took that burden upon themselves. The researchers gathered data from 20 different studies previously conducted about penis size. In each study, the measurements were taken by medical professionals, with the total sample size from all 20 being 15,521 men. The goal was to create charts which doctors can show to male patients, enabling them to see where they stand (har har) in the grand scheme of overall penis size distribution — hence the study's title, “Am I Normal? A Systematic Review and Construction of Nomograms for Flaccid and Erect Penis Length and Circumference in Up to 15,521 Men.”

Here's a look at their findings by the numbers:

It's worth noting that, among all the studies used for this particular review, only four had any information about erect penis length. As such, the sample size for that number (which, of course, is the one everyone is probably the most interested in) is pretty tiny: Only 692 people. But hey, 692 people is still 692 people, so you know what? It's time to let go of the whole “six inches is average” myth, because it turns out it's just that: a myth.

Not unlike the kraken.

Interestingly (although perhaps unsurprisingly), the Kings College study isn't the only set of penis-related numbers currently making their way around the web. Penis size is an ever-popular topic — the only problem is that not all of the sources out there are totally reliable. Mandatory, for example, recently put together an infographic comparing dick size by country across the globe. As the Daily Dot points out, however, most of the data used by the sources that chart cites was either self-reported (and therefore hideously unreliable), or gathered by J. Philippe Rushton in the '80s. And J. Philippe Rushton was not only flawed as a researcher, but also incredibly racist. Writes Aja Romano:

That's what Veale and his team meant when they said that “there have been no formal systematic reviews of penile size measurements,” because, well … yikes.

Hopefully, though, the findings of the Kings College London literature review will not only help everyone realize that we've all been carrying around an incredibly inaccurate view of what “average” is in our heads, but will also lead to more research that can confirm and/or refine what Veale and his team found. Perhaps the only thing weirder than our obsession with penis size is the fact that there's been so little actual scientific research done on it. Now's as good a time to start as any, right?

Ultimately, though, let's just all bear in mind the following: As long as you a) dig penises, and b) actually like the person to whom the penis with which you're currently involved is attached, size isn't all that important. When it comes to sex, all that matters is that everyone is having fun and feels good, right?