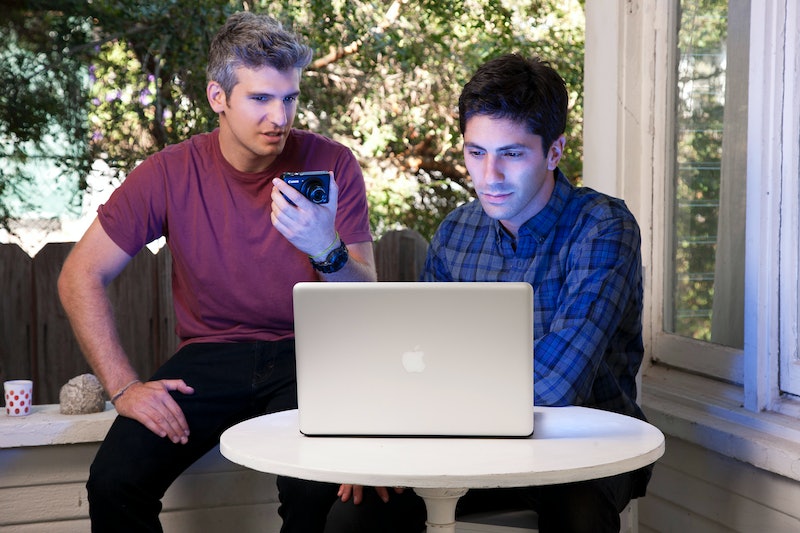 The brand new season of MTV's Catfish has begun, and you might notice things are looking a little different. Max Joseph is MIA on Catfish . In the premiere episode of Season 4, we learned — or were reminded of, if you stalk Nev and Max on social media — that Max is this big time Hollywood director now and in the middle of filming a movie with Zac Efron (they don't let you forget Zefron's name). Because Max is busy directing a film, different co-hosts will assist Nev in hunting out phonies online until Max rejoins Nev later on in the season. So what is the deal with this movie that is separating Catfish's dynamic duo?

The movie that Max is directing is called We Are Your Friends. The name doesn't give much away, but don't worry, we'll get to that. This is Max's first large-scale movie. Before We Are Your Friends, Max had directed video shorts and documentaries, but nothing with this star power. If you're worried that Max's absence will lessen your love Catfish, don't worry, because Max is only going to be gone for five episodes. Before you know it, he'll be back and throwing shady comments in that special way he always does.

Here's what you want to know about Max's upcoming film We Are Your Friends.

The film will allow you to get your unce-unce on while staring at Efron, so that's the TL;DR version of this. Looking for a few more details? The film follows young electronic DJ Cole, who is at the beginning of his career in EDM in the Hollywood nightlife scene. Cole meets James, a more experienced DJ, who takes Cole under his wing. Cole then starts to develop a relationship with James' girlfriend, which obviously complicates things.

Zac Efron is in this movie — did you know that? He plays Cole, the young up-and-coming DJ. Wes Bentley, of American Horror Story, The Hunger Games, and American Beauty, plays James. Emily Ratajkowski from Gone Girl will play Sophie, the girlfriend of James that Cole gets involved with. Scandalous!

When Does It Come Out?

There isn't a specific date for the release of the movie beyond 2015. Unfortunately, that's a lot of months to choose from, so let's hope it's sooner rater than later.