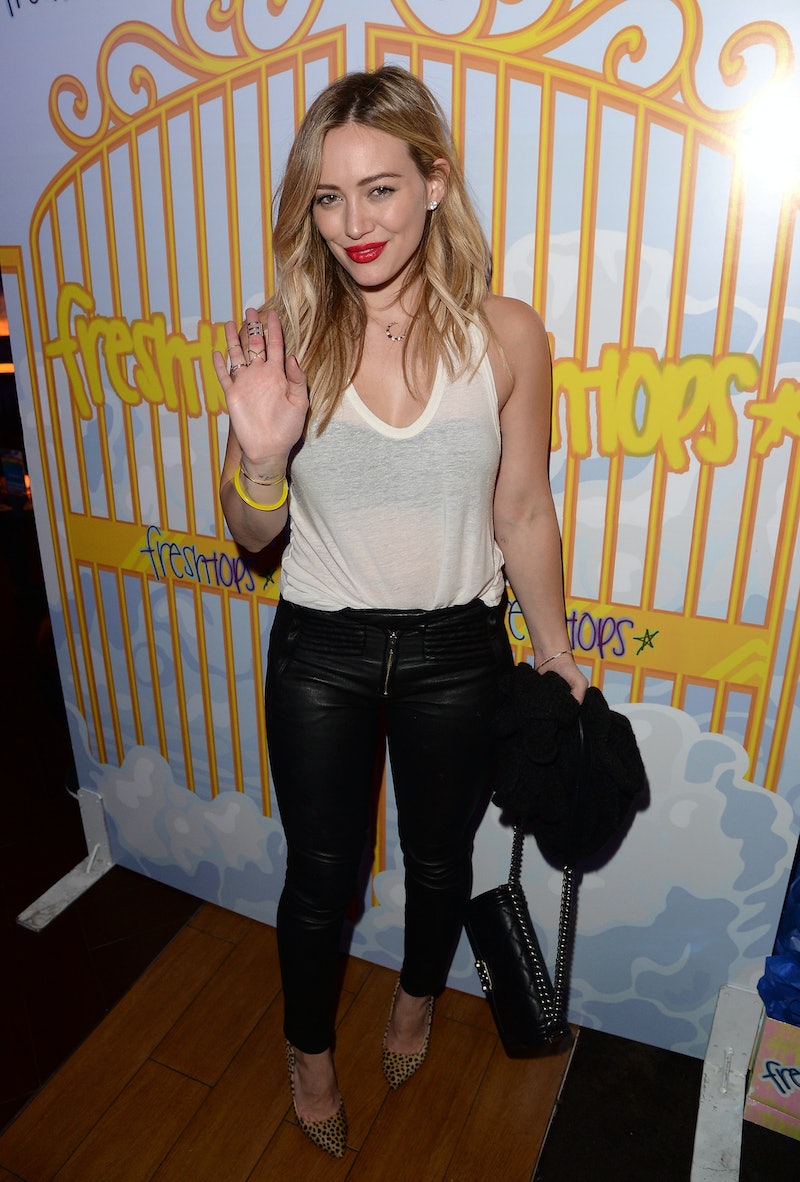 Lizzie McGuire is back, and she’s bringing her branded bare arms with her. In her new spread for Cosmopolitan, Hilary Duff flashes an array of tattoos — which, given that she fits squarely into the “America’s Sweetheart” category, raised some question as to whether they were real. Surely these must be a styled-on-set temporary dress-up tats (with the exception of her documented “ride or die” ghost), right? Duff doesn’t really have that many IRL ink marks, does she?

Alas, she does. How many exactly can’t be known for certain, as Duff seems to be adding them to her skin in droves (a recent report from the Huffington Post estimated six). But by my approximation, the number is about 15. Fifteen tattoos. That’s approximately as many tattoos as the rest of us who grew up with Hilary Duff now have. Celebrities — they’re just like us!

Let’s scoot her over from the A.S. sub-genre of stardom and boost her up to “cool mom" status, joining the ranks of Megan Fox (a fact which I was unaware of until just now), Jessica Alba, and fellow cutie-pa-tootie Reese Witherspoon, shall we? Duff’s tats are adorable, and because a small part of you still idolizes Cadet Kelly, we’ve provided photographic proof that these things actually exist.

This lil' guy was the center of speculation after it was rumored that Duff was exploring Scientology post-divorce. As it happens, that is not the case (at least in terms of the moon's significance). "My favorite moon is out tonight," she tweeted, "which is what arm tattoo actually stands for in case anyone was confused."

Pictured on the top and bottom right.

Regarding her "Let It Be" tattoo, Hilary is quoted as saying, "I have a hectic, crazy life. Things are crazy all around me, and I get stressed out. It's like, I’m just one little person, let it be. And that's what it is!"

Hil' got a lark next to her existing "stand by me" tattoo (above).

As we noted earlier, Duff got a BFF tat with her bestie Alanna Masterson, a gesture Bustle's Erin Mayer dubbed "to die for adorable." Couldn't agree more, personally. "Duff and Masterson have been friends for 12 years," she adds, "so even if they hate each other by 2015, it’s nice that they’ll always have these cool reminders of how tight they were."

Brooklyn is where she currently resides with her son after relocating to film her new series, Younger. Seems like New York is workin' out just fine.

In the ultimate "cool mom" move, Duff had her son's name Luca tattooed on the inside of her wrist with a teensy little heart next to it. Pretty adorbs.

These are merely the tattoos we could locate by way of the Big Bad Internet. You and me and everyone you know has a tattoo somewhere they'd rather not talk about, so we'll assume there are more the actress is covering up. But Hilary Duff certainly gives our other favorite tattooed mommy — Angelina Jolie, of course — a run for her money. She's probably being etched with her [x]th tattoo as we speak.