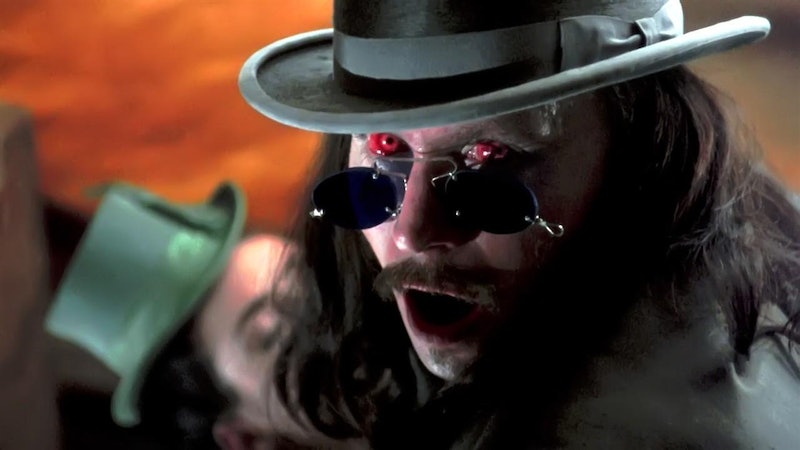 When I first saw Bram Stoker’s Dracula, I remember my first thought as the credits rolled being, “What did I just watch??” Francis Ford Coppola’s 1992 adaptation of Bram Stoker’s classic horror novel is a weird mix of the legitimately good and the delightfully terrible, a surreal combination that I find absolutely irresistible. With the insane popularity of vampire stories in the last decade (Twilight, Vampire Diaries, True Blood, and on and on and on and on), a lot of us are justifiably sick of the ubiquitous horror-creatures-turned-romantic-leads, but I never tire of Coppola’s version because, quite simply, Bram Stoker’s Dracula feels like no other movie I have ever seen: creepy, operatic, beautiful, campy, melodramatic, and dreamlike, all at once.

I want to be very clear about the fact that when I say I love this movie (and I LOVE it), I’m not at all suggesting that it is the best representation of Stoker’s 1897 novel. The fact that’s the movie is titled “Bram Stoker’s Dracula” is actually sort of hilarious because the script makes huge changes to the plot of the novel, the most egregious one being that the whole story is recast as a romance between Dracula and Mina Murray, who, the film tells us, is the reincarnation of Vlad Dracula’s long lost love. Which is ridiculous, but I don’t care.

These are only a few of the reasons I’m obsessed:

1. The costumes are arrestingly beautiful

Japanese costume designer Eiko Ishioka won the 1992 Academy Award for Best Costume Design for her work on Bram Stoker’s Dracula, and rightly so: The film's costumes are sumptuous, strange, and utterly captivating. Historically accurate they are not, but that’s hardly the point: Ishioka’s costumes make the film feel like a moving painting, a narrative happening far outside the realm of real life. Some stunning examples include Lucy’s disturbingly frilly wedding gown, which signals her transformation from brash young woman to inhuman blood fiend.

Vlad Dracula’s armor, evocative of human musculature, as if his skin had been turned inside-out...

I am not at all a Keanu Reeves hater, but even his biggest fan has to admit that English solicitor Jonathan Harker is… er, not his role. Reeves’s British accent in the film is hilariously bad—so bad that, for me at least, it’s gone so far past “terrible” that it’s come back around to “completely delightful.” It doesn’t help anything that the rest of his performance is strangely wooden and expressionless. Reeves looks so out of his depth alongside the gleefully campy Gary Oldman and Anthony Hopkins that I almost wonder if Coppola had Reeves do such awful work on purpose as some sort of artistic statement (although what that statement would be, I have no idea). Here is a handy compilation of his worst (and therefore best) moments:

To be fair to Keanu, his isn’t the only dreadful performance in this movie. Winona Ryder, who is typically excellent in most roles, is really, really bad here. Her accent is almost as off as Reeves,’ and her version of Mina Murray—a smart, modern woman in the novel—is utterly milquetoast.

When filming Bram Stoker’s Dracula, Coppola was adamant that the film would use only practical special effects. That is, instead of using blue screen or computer effects (as was common in 1992), the film’s many visual effects were accomplished through methods pioneered in the days of early film: multiple exposures, rear projection, mirrors, forced perspective, and running film backwards.

The result is a film that somehow manages to seem both more real and less real than contemporary film at the same time. Digital effects, even now, can look insubstantial and overly glossy; practical effects (like Coppola’s decision to dress Oldman as a giant bat rather than insert computer generated one in postproduction) have texture and weight, making the supernatural elements of the movie are strangely tangible. At the same time, however, many of the effects are clearly artificial, like the image of a train traveling across what is clearly a painted landscape. For the viewer, the ultimate effect of this realistic/artificial duality is a heightened sense of dislocation; In the film, we inhabit a surreal dream space, cycling temporally between the movie’s late-Victorian setting, its early 1990s creation, and its early 20th-century effects. On the whole, it’s strange, unsettling, and riveting.

While Keanu Reeves and Winona Ryder are so bland in this movie that Coppola would have done well to simply cast cardboard cut-outs of them instead, Oldman goes all out as Dracula, creating a unique version of the world’s most famous vamp that somehow manages to be charismatic, creepy, romantic, legit scary, and completely ridiculous all at once. At the beginning of the film, he is wonderfully campy as the bewigged older Dracula, lustily licking blood from Jonathan’s razor. Later, transformed into the young Vlad, he’s swoonworthy as he seduces Mina with his intense eyes and long, flowing hair.

Somehow, in our post-Twilight, post-True Blood age, vampires—undead fiends who drink human blood—have managed to become symbols of the perfect, sensitive, sexy, sparkly boyfriend. One thing I love about Bram Stoker’s Dracula is that—although the film does romanticize Stoker’s novel—Dracula is portrayed as actually scary. He begins the film as a white-skinned, wizened, lizard-like creepster, and although he does eventually take the shape of the young and attractive Vlad, we know that it’s only a cover for the horror that lies beneath. In the scene above, he transforms into a giant man-bat before dissolving into a puddle of rats. Edward Cullen, eat your heart out.

The film’s score, composed by Polish composer Wojciech Kilar, flows from the campy to the surreal, from the horrific to the romantic. “Love Remembered” is particularly lovely.

7. It’s beautiful and campy at the same time

What makes Bram Stoker’s Dracula so enjoyable is its unexpected pairing of over-the-top camp with real beauty. Many parts of the movie are almost laughably melodramatic or artificial, from the ham-fisted acting to the purposefully old-fashioned looking effects and transitions between scenes. At the same time, however, there are moments of good acting, effective horror, and great visual splendor. This juxtaposition of camp and style creates a sense of surreal displacement for the viewer; watching the movie, we don’t know quite where we are or what we’re doing, and I, for one, love it.