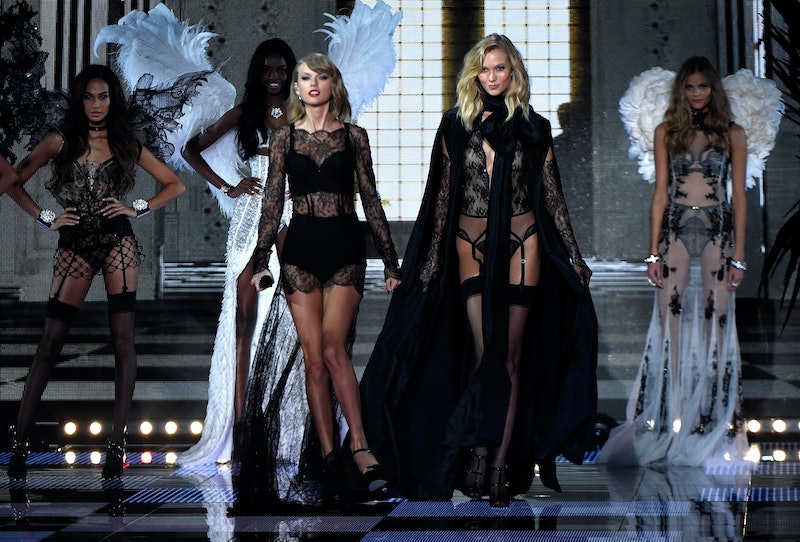 This week, another member was inducted into Taylor Swift's gaggle of best friends, aka Hollywood's most exclusive and adorable girl gang. The lucky lady to be Taylor Swift's newest BFF was Camila Cabello of Fifth Harmony, and to date it's unclear if being ritualistically covered in fairy dust was part of her initiation. In any case, now is as good as time as any to call attention to this fearsome group of women, and the crimes they are inflicting on society.

You already know that Taylor's the mistress of the dinner party and an endless fountain of love, but we ignore the fact that RIGHT BENEATH OUR NOSES she is forming an army of powerful female celebrities — and these lady monsters are going to join forces and eventually take over the world. It's already starting, and we haven't even bothered to punish them for the horrible (aka amazing) things they've done. Luckily, I've started a list, so we can start the persecution whenever you want, America. I know you're laughing now, but you won't be giggling soon if these crimes are any indication.

So here's 13 sins against humanity that Taylor's girl gang have committed.

Good luck finding some high-end dresses for your Grease-themed party next week.

They ARE vegan, but they didn't really consider everyone's respective food preferences. Later on they'll make an entire separate batch of gluten-free, vegan gingerbreadwomen. With glittery made up from pink sprinkles.

Keeping each other up late at sleepovers with riveting story-telling, secret-sharing and celebrity Truth or Dare.

The latter category should really be a reality TV show.

This conflict is easily resolved when Taylor is like, "No, no, here, try on my Dragon Girl by Nars, I feel like it would look so beautiful with your skin tone."

I have to hide your stomach underneath like 4 sweater dresses and apply 7 filters before I look halfway decent these days.

Splash wars in which someone almost got beautiful turquoise Hawaiian water in their eyes.

Their games of chicken are intense.

Occasionally coordinating hairstyles so everyone looks way too similar.

You get so many stunning blondes in one photo and eventually someone needs to put their hair up or gtfo.

Getting two birthday cakes for a fellow member of the girl gang instead of just one.

Oh my god, not AGAIN with the generosity.

(After this was taken the cakes fought to the death. Chocolate won.)

Keep your sunglasses on at all times.

Now you can no longer look charmingly retro again.

OK, maybe not that one.

More like this
Everything To Know About Taylor Swift’s 10th Studio Album, 'Midnights'
By Grace Wehniainen and Jake Viswanath
Taylor Swift Wants To Direct A Movie Next — But You Might Have To Wait
By Radhika Menon
Taylor Swift’s Latest Midnights Look Went Heavy On The Glitz
By Allie Fasanella
'Selling Sunset's Vanessa Married Her British Beau Nick In A “Fairytale” Wedding
By Darshita Goyal
Get Even More From Bustle — Sign Up For The Newsletter