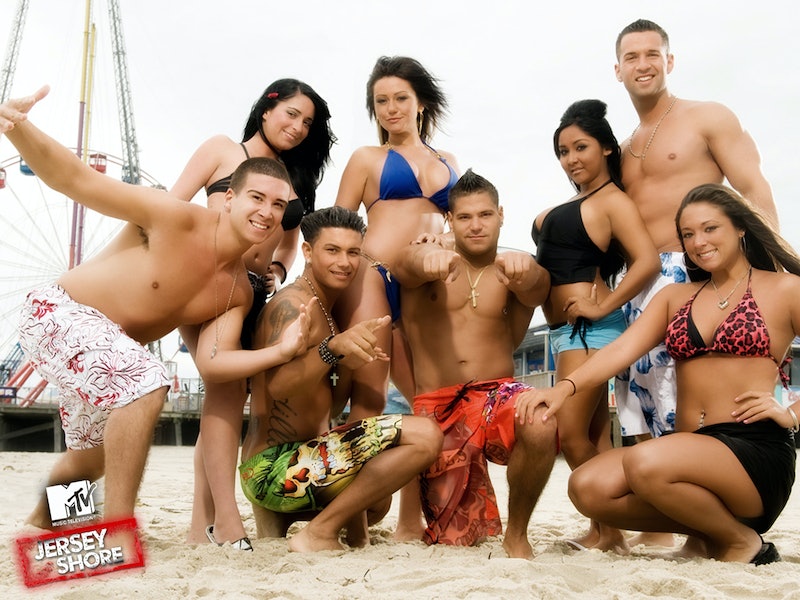 As someone whose lived in New Jersey most of her conscious life and spent summers in Seaside Heights, people often ask me if I hate Jersey Shore, and hate... is the wrong word. "Adoringly resent" is a lot closer to the truth, because while I think the show is a television travesty, I also watched every episode of the six season train wreck... and got emotionally invested, no less. This is why, long after the fact, I feel like we still need to celebrate some of the more outrageous moments in the Jersey Shore pilot that sold the series as a pop culture monolith.

(And also to just celebrate JWoww, who I sincerely think is the best person ever. I just really feel like she'd have my back in a fight, and that's how I'm picking out friends these days.)

Anyway, as a throwback treat, I watched and recapped some of the more incredulous moments of the first episode of Jersey Shore, including all the things you may have blocked out: The budding romance between Sammi Sweetheart and The Situation? Snooki's initial feelings of isolation? Angelina's entire existence? All of this and more awaits you below.

So enjoy these certifiably outrageous moments from the Jersey Shore pilot.

I hope he put on every rhinestone on by hand.

He then takes the entire hair section of Sephora to the shore house.

3. "My ultimate dream is to move to Jersey, find a nice, juiced, hot, tanned guy, and live my life."

This is the high life ambitions of undoubtedly the break-out star of the series, and her first appearance really is vintage Snooki, pouf going strong. This is like, every Snooki Halloween costume from 2010.

4. All of the styling here.

And honestly it always looked crumpled and deformed, like he had worked out improperly.

6. “If I walked through the door, and saw myself, I would probably grab my girl real quick.”

What? There's some kind Inception thing going on with that statement.

Well, technically it's the next town over, but Hazlet is my train station. I'm pretty sure my friend Jim had an art class with Sammi Sweetheart, which of course is a line I put on my resume.

8. “A guidette is someone who knows how to club it up, takes really good care of themselves, has pretty hair, cakes on make-up, has tan skin, wears the hottest heels, pretty much knows how to own it and rock it.”

9. "I am like a preying mantis, after I have sex with a guy I will rip their head off."

10. Actually, JWoww IS doing lingerie modeling in her intro, so either that was a side gig or she just has impressive self confidence.

I wouldn't put either past her. Not with those perfectly dusted boobs.

11. "Beers, bitches and the beach. That’s all you need to know about the Jersey Shore."

I'm pretty sure this is on a T-shirt somewhere.

Nobody should be able to say that line without a heavy dose of shame.

14. Sammi has actual printed out directions.

I feel like we're in the dark ages here.

15. "First thing I see is this spikey-haired guido kid and I'm like, 'This kid's perfect.'"

The Vinny-Pauly love was evident early on.

16. The shade that's thrown when JWoww introduces herself as "JWoww."

“Not hating on the girl, but you can just say your real name. I don’t say ‘hey, what’s up, my name is VWoww.'”

17. Everyone straight up calls Snooki "Snickers" the entire first episode, and then throws more shade.

“She was like a little minature chihuahua, painted with some spray paint black.”

“Nobody has a suitcase in your family that you can borrow?”

19. Snooki gets full on white girl wasted on her first night here, which causes tension.

To be fair, Snooki is basically miniature-sized, and therefore should be passed out after half a can of Miller Lite.

20. The Situation and Sammi are like, straight-up crushing this entire episode.

We almost forget that was a thing. Mainly because of all their spats, and Sammi's melodramatic Ronnie relationship that takes place over the next million seasons.

20. The next day Snooki's hungover and everyone straight-up abandons her.

21. “I thought you were like vomiting your brains out, I don’t want your pukey breath on me.”

Oh no she didn't.

22. “Mike is just amazing, we just feed off each other, everything’s cool.”

Suffice to say karma gets Sammi back for the previous insult.

Jersey Shore was always known for it's feminist platitudes.

24. The Bible that's just laying around.

Actually the producers probably had to exorcise that house between seasons.

25. When Pauly and The Situation are straight up vultures.

Literally preying on girls off the streets.

27. This decline of civilization.

I don't even know what she's reacting to, I just wish she was my best friend.

29. When the situation denies making out with a girl, even though he's BEING FILMED AT ALL TIMES.

30. When Snooki threatens to move out on the second day because she feels like an outcast.

Spoiler alert: She has been an MTV staple for 6 years now.