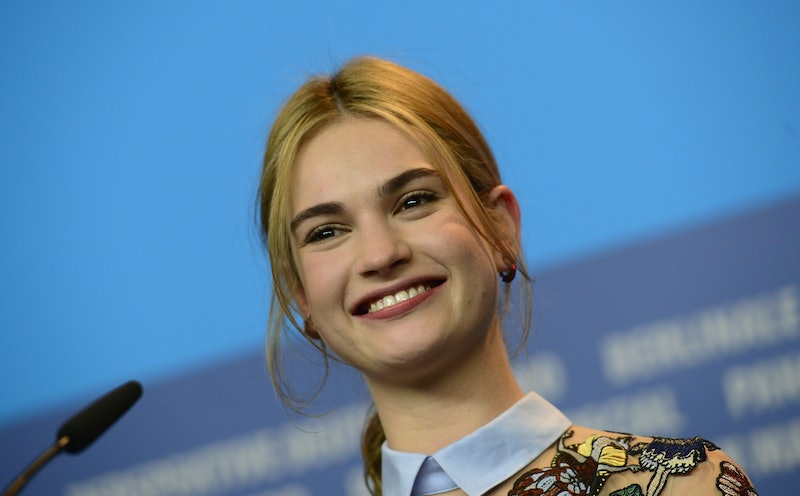 Lily James just has "Fashion Girl" written all over her, doesn't she? Recent corset controversy aside, I think Ms. James is here to stay: Between all of the fabulous Mary Katrantzou she wore on the Cinderella press tour (I was a particular fan of the iguana and ballerina embroidered number she wore in Berlin) and the practically iconic Elie Saab epitome of dress-dom that she wore to the Los Angeles premiere of the film, she has fashion staying power to spare. Most recently, Lily James stunned in two Prabal Gurung confections, both of which which the label shared on its Instagram account.

The press tour for Cinderella may be coming to a close (and her character on Downton Abbey may be moving to America, along with Imitation Game star Allan Leech), but don't despair — we're sure to be getting a lot more red carpet glamour from Lily: After all, she's starring as Elizabeth Bennet in the long-awaited (seriously, how long was that thing in pre-production?) Pride and Prejudice and Zombies, and according to her IMDb page, she'll be starring in the upcoming War and Peace miniseries, as well as a new film from Shameless showrunner John Wells.

We also have these two stunning looks to tide us over until the release of the Cinderella film. Both of James's Prabal Gurung ensembles were absolutely gorgeous — one was an stunning tea-party dress (actually, quite similar to Cinderella's daywear), and the other was a lovely printed cocktail dress. It's nearly impossible to pick a favorite. Let's take a look, shall we?

Yep, she's definitely a fashion darling on the rise.

More like this
Sydney Sweeney Just Revived The Iconic ‘90s Cone Bra Trend
By El Hunt
Here Are All 703 Outfits Rachel Wore On Friends
By Kat George
The Best Heels For Bunions, According To A Podiatrist
By Margeaux Baulch Klein and Maria Cassano
Dua Lipa On YSL Beauty, Plus Her Fearless Approach To Hair & Makeup
By Erin Stovall
Get Even More From Bustle — Sign Up For The Newsletter