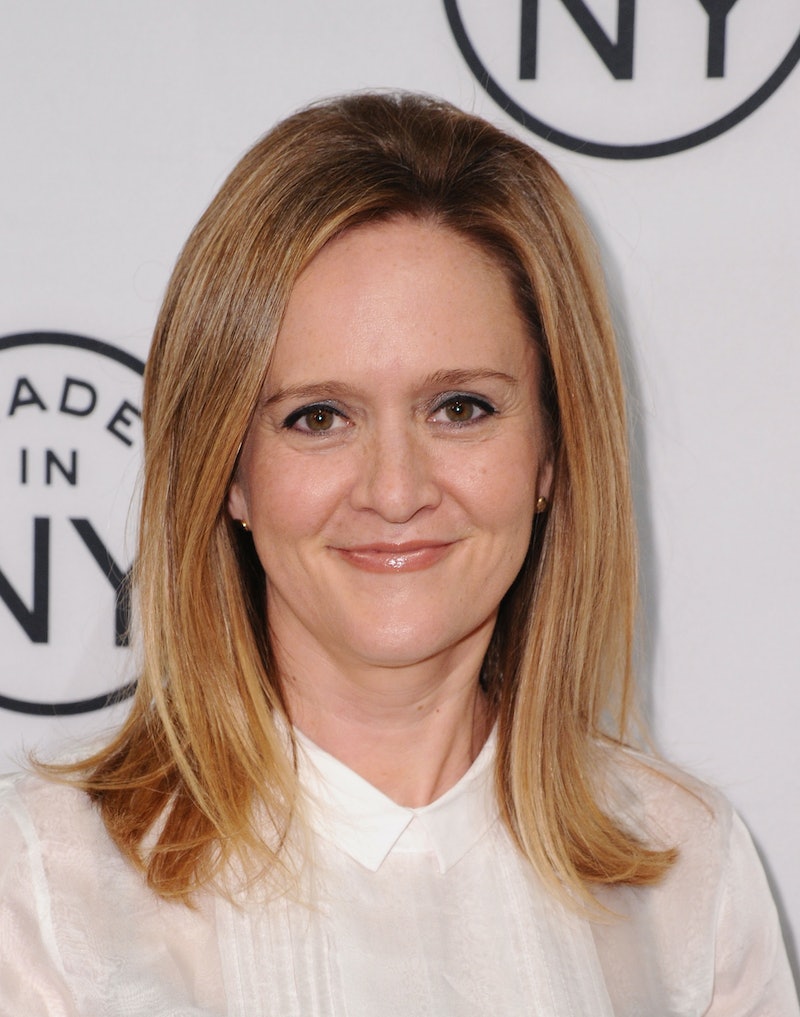 First Jon Stewart, now this. It was announced earlier today that Samantha Bee, longtime The Daily Show correspondent, is leaving the cable series to pursue a TBS project with her husband and fellow ex-Daily Show correspondent Jason Jones. On the bright side, their upcoming project with TBS does sound intriguing — Bee and Jones will be developing a satirical series that looks at today's politics and current issues — and the The Daily Show does have a history of creating huge names: After all, Comedy Central first took Stephen Colbert from The Daily Show to make his own late night program, The Colbert Report, then HBO nabbed John Oliver for Last Week Tonight. If you want a popular late night comedy show with a political edge, I guess you've got to start at The Daily Show, eh?

Additionally, Samantha Bee will be serving as an executive producer on the TBS show, which is a big win — the more women there are making television, the more diverse our programming becomes!

Still, though, this is sad news: Bee and Jones are amazing onscreen together, and it will be hard to imagine The Daily Show without Bee. With this new development — as well as the fact that Jon Stewart is leaving the show — The Daily Show of 2016 will certainly look and feel very different than it does today. Here's why her exit is a huge loss for the show, and feminism as a whole:

She Was There When Not Many Women Were

The Daily Show like almost every show on television, sadly has a major disparity in gender when it comes to its employees. Samantha Bee has been with The Daily Show since 2003, and when the show is at its most-dudeliest, she has always been there, reminding everyone that this ain't no boys' club.

It doesn't just need more female correspondents, it needs an actual woman HOSTING the show. Not only would it shake up the current landscape of late night comedy, it would put a woman in a position to be speaking to the biggest movers and shakers in America. Though The Daily Show is a satire, it's highly regarded as one of the best news shows out there. Considering Bee's tenure, she could have been one of the first in line to take over, especially because Jessica Williams — though brilliant — has stated she probably be too young for network execs to sign on as host.

She Brought Women's Issues to the Forefront

Samantha Bee's deadpan delivery always shines a glaring light on those face-palm moments in our current events. No matter what she covers, Bee highlights privilege — especially the differences in how men and women are treated in this world.

She Does Not Stray From the Uncomfortable Subjects

From vaccinations to minimum wage to federally-funded penis pumps.

She's a Major Part of the Show's History

Was anyone sad when Craig Kilburn left? Nope. But how sad are we about Samantha Bee? SUPER SAD.

We Need Her, For the Love of Hillary

Will Comedy Central throw in the towel with the exit of Stewart, Bee, and likely Jones? Not only is it up to the writers to maintain the quality and integrity of the show, it needs one hell of a host. Here's hoping we get to keep The Daily Show and finally get a little more diversity in the news team with these upcoming vacancies.

More like this
Here’s Everything Coming To & Leaving Netflix In August
By Jake Viswanath
New ITV Drama Maternal Is Lifting The Lid On Life As A Woman In The NHS
By Catharina Cheung
It’s Official: 'The Bachelorette' Is No Longer A Fairy Tale
By Samantha Allen
Beyoncé & Madonna’s “Break My Soul” Remix Honors A Group Of Black Icons
By Stephanie Topacio Long
Get Even More From Bustle — Sign Up For The Newsletter