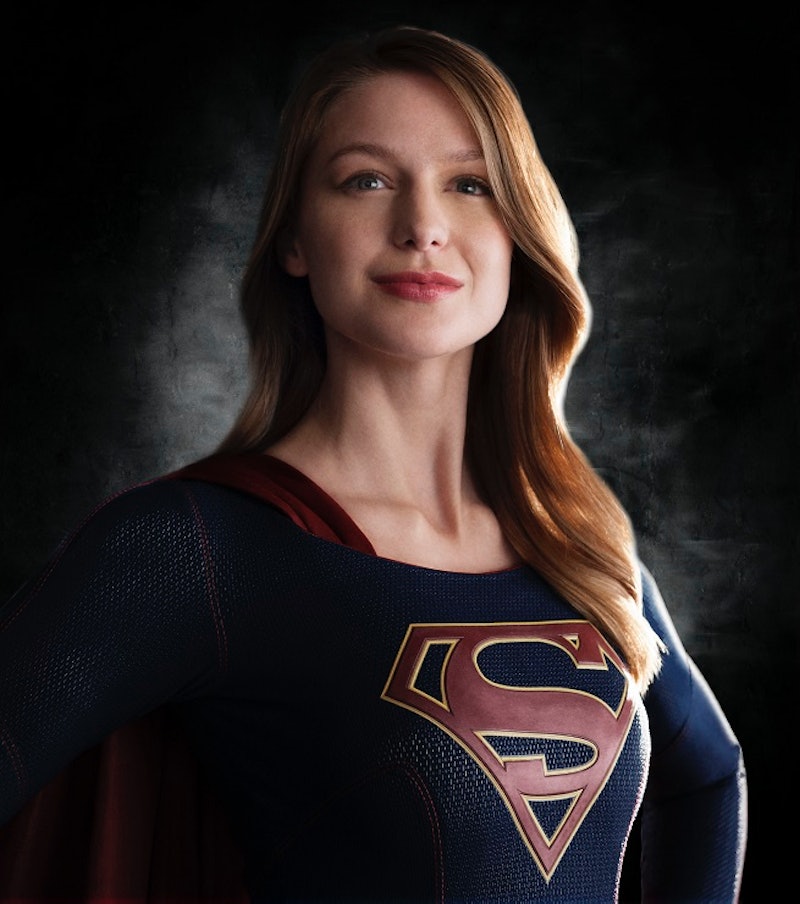 It's hard to be a woman and a comic book fan, especially now that comic book movies are becoming such an explosive genre. Females tend to be cast as love interests or supporting roles, while men get all the glory — and the cool superpowers. And when they are the hero? They're dressed in tight, skin-bearing outfits that look completely impractical for fighting any kind of crime. However, CBS' new pilot Supergirl, starring Melissa Benoist as Supergirl, aka Kara Zor-El, is about to change all of that. The first images of Supergirl are here, and I can already tell that this show is going to be amazing based on the fact that they don't seem to be sexualizing her character at all.

In the photos, this version of Supergirl is wearing the traditional costume — red cape, blue top with the iconic "S," red skirt. But she's totally covered up, wearing tights, boots, and a neckline even the Duggar family would approve of. The colors are darker, the costume more real, and it seems like it's a sign we're truly making a breakthrough here. I'm excited about this not because I think women need to cover up — actually, in my opinion, we should wear whatever we want regardless of what men might think — but because for once, someone is making a comic book starring a woman come to life without deliberately attempting to make her appeal sexually to men. Could this be it? Could they have finally realized men aren't the only ones watching these movies? Could this be the first step in bringing more feminism into the superhero genre? My fingers are crossed that it is.

As a kid, I wasn't really into superheroes because I couldn't relate to them. Most of them were men, and the ones who weren't were rarely talked about. They certainly weren't on TV or in the toy department all the time like Batman and Superman were. If Supergirl continues to get this right, maybe that will change. Maybe she can become a powerful role model for the next generation of girls...without bearing her breasts or her tummy to make sure the guys like her, too.

This isn't the first time in recent history that Supergirl decided to buck tradition and break new barriers in the comic book world. Last month, they decided to cast Mehcad Brooks, a person of color, to play Jimmy Olsen, Supergirl Kara Zor-El's love interest. This wouldn't be such a big deal if Jimmy wasn't white in the comic books, but he is. Score another for Supergirl celebrating diversity and taking a risk that the people behind many other comic book projects haven't dared to take.

It'll be awhile before Supergirl hits the screen, but I'm already excited to see what other progress the show might bring. If it can succeed, it may set a new standard that all female superheroes have to live up to in the future, and that's something we've waited a long time for.