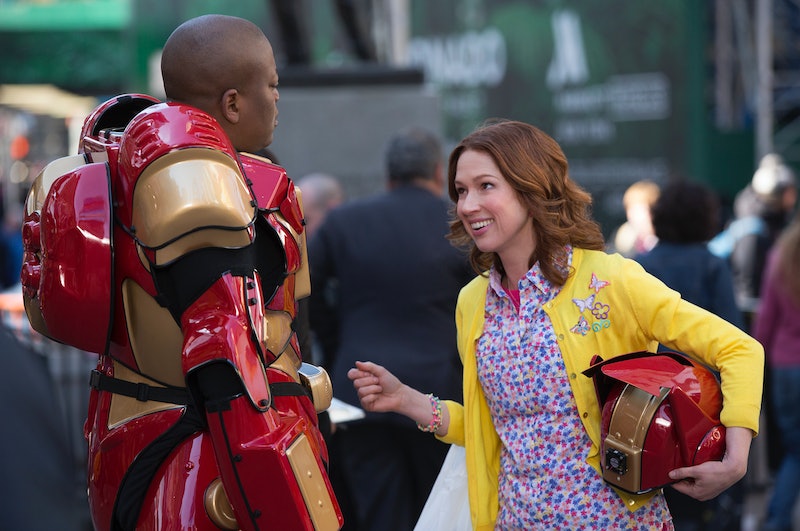 Netflix gave us a spectacular gift this weekend: the irresistible option to cancel all plans with the outside world and binge on Season 1 of The Unbreakable Kimmy Schmidt . This new comedic treasure chest from creator Tina Fey is every bit as wonderful as we hoped it would be when we first saw the trailer. It’s Ellie Kemper at her finest, as Kimmy Schmidt — former kidnapping victim, bunker captive, and fan of all things ‘90s. Kimmy is a bit of a loon (in the best way possible), but considering how she’s been living underground in a bunker for the last 15 years, and thinking the world had ended, it certainly makes sense.

Ellie Kemper takes a role like Kimmy, who could easily be seen as damaged and almost too strange, and makes her lovable. It’s along the same lines as what Lisa Kudrow did with Phoebe on Friends, where she’d have a line about living on the streets or her mother committing suicide and gives it a dismissive but punchy makeover that makes you laugh and then wonder if it was appropriate to do so.

Kimmy has literally been sheltered for the last decade and a half, so many experiences all women share during what is probably the most crucial period in adulthood are completely lost on her. She gets harassed on the street by a construction worker and doesn’t even pick up on it, to the point where she has a full conversation with the strange man and compliments his yellow hat. She was taken in 1998, so she still assumes Hanson is blowing up the countdown on TRL. She has no clue how to be an adult, but this season we get to see her give it her best shot. She is, however, an expert on The Baby-Sitters Club, specifically volume 12 of the mystery series — Dawn and the Surfer Ghost. It was one of the few items she had down in the bunker and the story is embedded in her brain.

This comes in extremely handy when she lands a job as a babysitter/dog masseuse for a wealthy NYC family, hired by Mrs. Voorhees (played by the eternally amazing Jane Krakowski). The stepdaughter is a teenage monster, as most girls are at her age, and she bullies Kimmy incessantly. But in an effort to seem “cool” to her awful friends, the stepdaughter pretends to have met a surfer in California whom she hooked up with. The description of this dude matches the surfer in the BSC book, and Kimmy brilliantly catches her in the lie.

She uses that power for good and grounds her (per the request of Mrs. Voorhees) to keep her from getting drunk with her underage a-hole friends. Because Kimmy has zero mean bones in her body, she continues to playfully deflect the girl’s cruel taunts with outdated references and positivity.

The dynamic between these two seems like one that will develop into something strong and mutually beneficial over time, but we are definitely not there yet. The takeaway from this episode is that you can be bullied at any age, and that responding with ‘90s catchphrases will totally confuse and disarm your harasser, and that The Baby-Sitters Club will continue to serve as a form of solace and justice for those in need of both. Kristy and the gang would be so proud.

More like this
The First Trailer For 'That '90s Show' Includes So Many Nods To The Original Series
By Jack Irvin, Alyssa Lapid and Grace Wehniainen
The ‘Emily In Paris’ Season 3 Trailer Teases Major Career & Love Crossroads For Emily
By Bustle Staff
Jenna Ortega Wanted To Redo The 'Wednesday' Dance Scene For A Controversial Reason
By Grace Wehniainen
This Tiny Clue In 'Wednesday' Foreshadowed That Season Finale Twist
By Grace Wehniainen
Get Even More From Bustle — Sign Up For The Newsletter