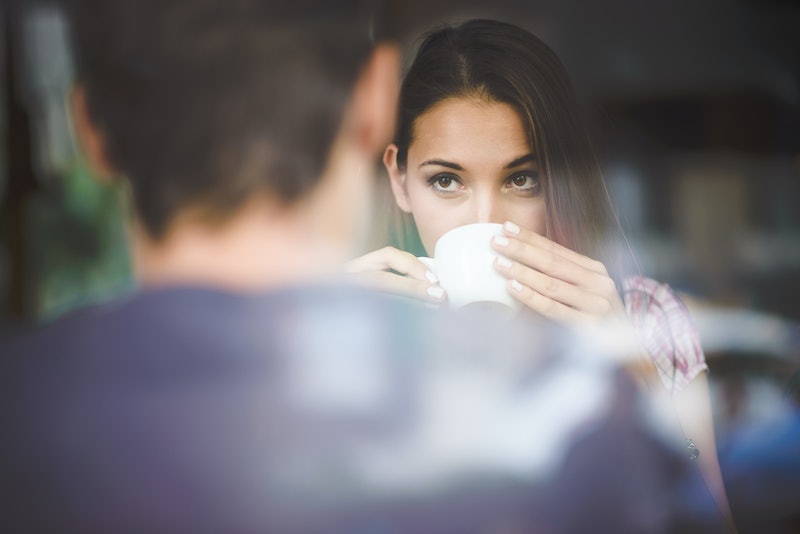 Oh, Tinder users. Is there anything worse than swiping right on Tinder, only to be met with a pickup line that would be offensive even to a caveperson? Sadly, rude Tinder conversations are all too common, because (spoiler alert) not every guy who looks like Ryan Gosling is going to be articulate and charming. In case you've been in a literal cave for the past year, Tinder is a hookup app (or rather, a hookup-turned-dating app, because it's definitely being used by people who are shopping for a spouse as much as people who are shopping for a quick orgasm) where both parties have to agree before they can start chatting (swipe left for no, right for yes; seriously, where is this cave you've been in?), and was widely regarded as a dating app that was good for women when it first launched. But Tinder may not be the dating magic wand for everyone (pun intended). There's no question it's popular, and that if you're not using it, you know someone who is: Tinder boasts 50 million active users, who it says spend at least an hour on the app daily, and check their accounts more than 10 times a day.

Because it's always fun to see what our online actions would look like in real life, this video has taken some of the worst of Tinder's pickup lines and put them into the mouths of actual people, and they sound about as awful and awkward as you would imagine:

"You remind me of art... because you're so hot I want to nail you against the wall"

"Are you a drill sergeant, because my privates are standing at attention!"

So that's four minutes of your life you'll never get back (sorry). Is there any way to combat the Tinder pervs? Probably not, but there should at least be some snappier comebacks. Let's try out a couple, so in case you encounter anyone like these cro-magnon men next time you swipe right (or should I say "when you encounter them"), you're armed and ready.

Line: "Are you a banana? Because I find you appealing."

Reply: "Really, a banana comparison? Let's start with something more realistic, like a baby carrot."

Reply: "So you're all three? Great: A guy in a cape and tights who's into caves and bugs, just what every girl dreams of."

Line: "You seem like the kind of girl who wants to be tied up and have Nutella eaten off of her ass."

Reply: "If I have a jar of Nutella, what do I need you for?"

Of course, some of the more disgusting lines, like the icky stalker who demands you come to his place, don't even deserve a response. But the next time you get a Tinder creeper, try to imagine him saying his pathetic pick-up line attempt out loud and in person. Their words will instantly become just plain sad.